Kakadu is home to more than 280 species of birds, making up one third of all bird species in Australia.

During our annual Kakadu Bird Week, from September 29 to October 5, we like to showcase some of the beautiful birds you might see around the park this season.

In no particular order… 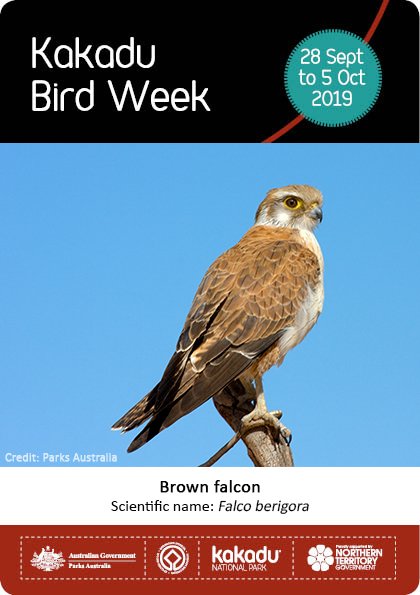 The brown falcon (Gundjeihmi name Garrkkanj ) is a small to medium-sized bird of prey. It can range from pale sandy-brown to almost black, but it always has dark thighs and pale barred feathers on its underwing. The female is larger than the male.

Where will you find it? This bird lives in all but the densest forests, and prefers open grassland. It perches in scattered trees to look out for prey on the ground. It is found throughout Kakadu. 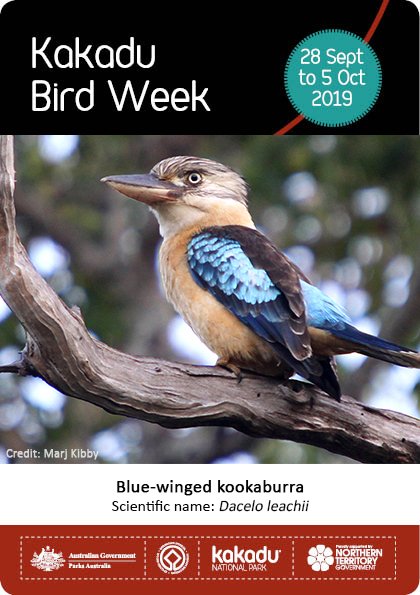 The blue-winged kookaburra (Gundjeihmi name Barradja) is slightly smaller than the popular laughing kookaburra. The male has striking sky-blue wings and rump, cream-coloured upper and underparts and a blue tail.

Where will you find it? Try looking up at tree perches in Kakadu’s woodlands and paperbark swamps, and on the wetland fringes. You may see it at Kubara’s Burrungkuy (Nourlangie region) or while on the Kungardun walk at Yellow Water. Also try Gunlom Campground in the Mary River region. 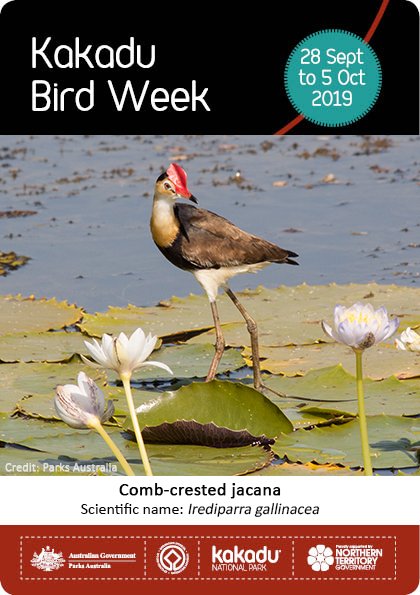 The comb-crested jacana (Gundjeihmi name Dagarreguyengguyeng) is also known as a lily walker, lotus bird or Jesus bird. It has a canny ability to seemingly walk on water. It has a bright red comb on its forehead and ranges in size from 20-24 cm. The female is larger than the male.

Where will you find it? These birds rarely come ashore, but you can see them on the floodplains and billabongs at Yellow Water, Mamukala in the South Alligator region and Anbangbang Billabong in the Burrungkuy (Nourlangie) region.

The Brolga’s name in Gundjeihmi language is Algordou. It’s the graceful giant of the wetlands. It ranges in size from 100-125 cm and has a featherless red band behind its eye running across the top of its neck. It is famous for its energetic trumpeting dance during the mating season.

Where will you find it? The brolga lives in open wetlands and coastal mudflats. During the drier months of June to November, noisy flocks will gather at springs in dry grasslands. Look for it at Mamukala wetlands and on the Kungarre walk in the South Alligator region. It’s also prominent at Yellow Water. 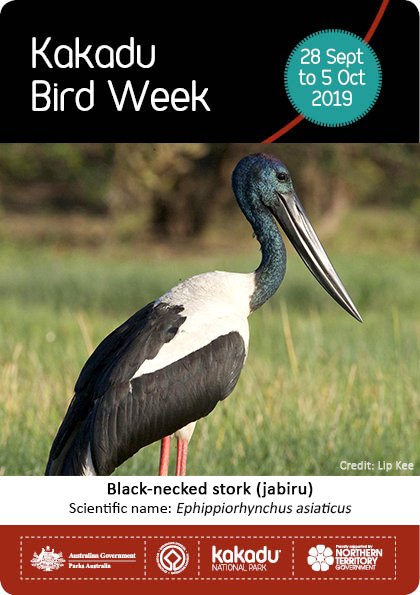 The black-necked stork (Gundjeihmi name Djagarna) is the only stork found in Australia. Its enormous black bill and long red legs makes it a Kakadu icon. Juveniles grow to full size at about 112 cm with a brown and black body and grey legs, and when entering adulthood, they change to a sleek black and white body with glossy dark green and purple neck.

Where will you find it? This one is commonly found in wetlands, on the edges of billabongs, floodplains and rivers. You can spot one year-round in South Alligator, Burrungkuy (Nourlangie) and Yellow Water at Kakadu. 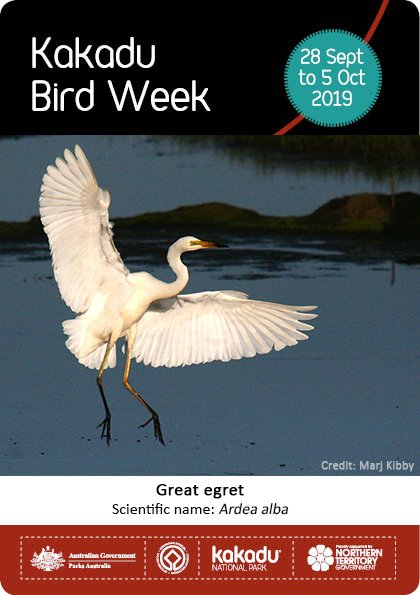 The great egret (Gundjeihmi name Algurndurr) is a large bird that can reach a height of 1 m, making it easier to pick apart from other white egrets. When they are not breeding, the bill and facial skin are yellow. During breeding season, the bill turns mostly black and facial skin becomes green. Long nuptial plumes that look like hair-like feathers, hang across its lower back.

Where will you find it? Egrets can be found along most rivers and smaller waterways throughout Kakadu, where they wade through the shallows looking for food. One of the best places to see them is Anbangbang Billabong in the Burrungkuy region. 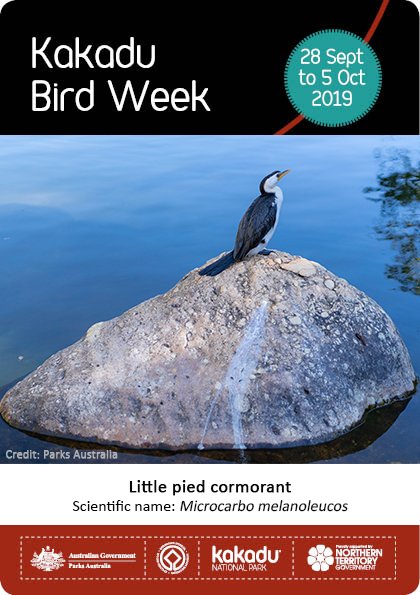 The little pied cormorant (Gundjeihmi name Dedgorrk-dedgorrk) can look a little scraggly at times and grows to about 58 cm. It is black above and white below, with a bright yellow bill and small black crest. You will often see them spreading their wings to dry in the sun.

Where will you find it? They are happy alone or in a flock, and like living in freshwater estuaries. Find them in the South Alligator region, at Mamukala and also try the Yiligadjarr walk in the Jabiru region, as well as Yellow Water wetlands further south. 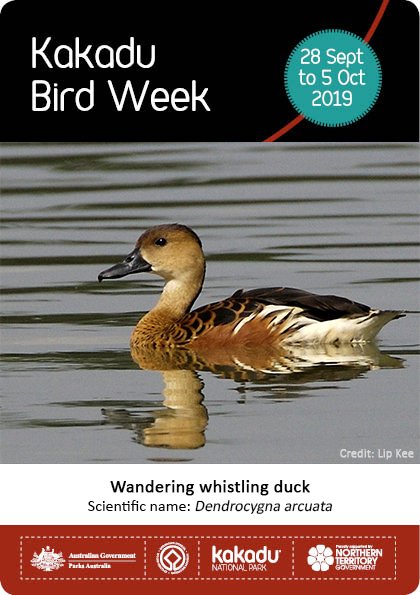 The wandering whistling duck (Gundjeihmi name Djurrbiyuk) is also called the tree duck. It’s named for its whistling call and the whistling noise of its wings during flight. It ranges in size from 54-60 cm.

Where will you find it? This duck loves deep vegetated billabongs, swamps and flooded plains, where aquatic plants and insects are plentiful. During Gurrung season (August to October) look for these birds on the billabong Kungarre walk and at the Mamukala wetlands, Anbangbang Billabong and the waterways of the Yellow Water region. 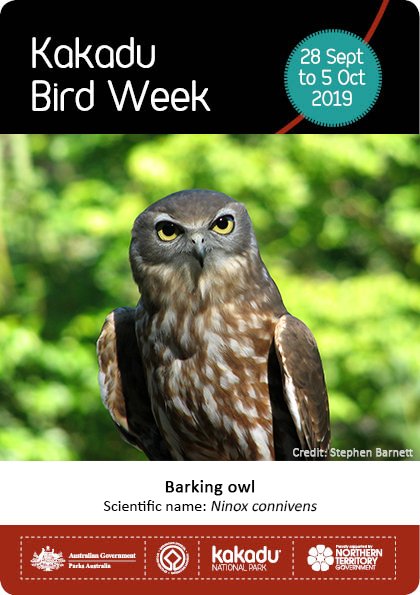 The barking owl (Gundjeihmi name Ngokngok) is a medium-sized hawk owl. It is named for its dog-like barking at night. It ranges in size from 38-43 cm.

Where will you find it? You can hear this bird throughout Kakadu’s woodlands. During the daylight hours, try looking and listening for it in paperbark swamps at Anbangbang Billabong or Mamukala wetlands. Also try the Kungardun walk in the Yellow Water region.

And last but not least, the sacred kingfisher is a medium-sized woodland bird that prefers mangroves, woodlands, forests and river valleys. It is called “sacred” for it is said to be a holy bird for Polynesians, who believed it could control the waves. It has a bright turquoise back, rump and tail, with buff-white underparts and a black eye stripe from its bill to the nape of its neck. The female is slightly duller in colouring.

Where will you find it? It is attracted to the woodland and paperbark forests where it can feed on small reptiles, insects and their larvae. It likes low-lying branches while on the lookout for prey.

We can’t wait to see you in Kakadu.