Parks Australia recognises ‘Always Was, Always Will Be’ for NAIDOC Week 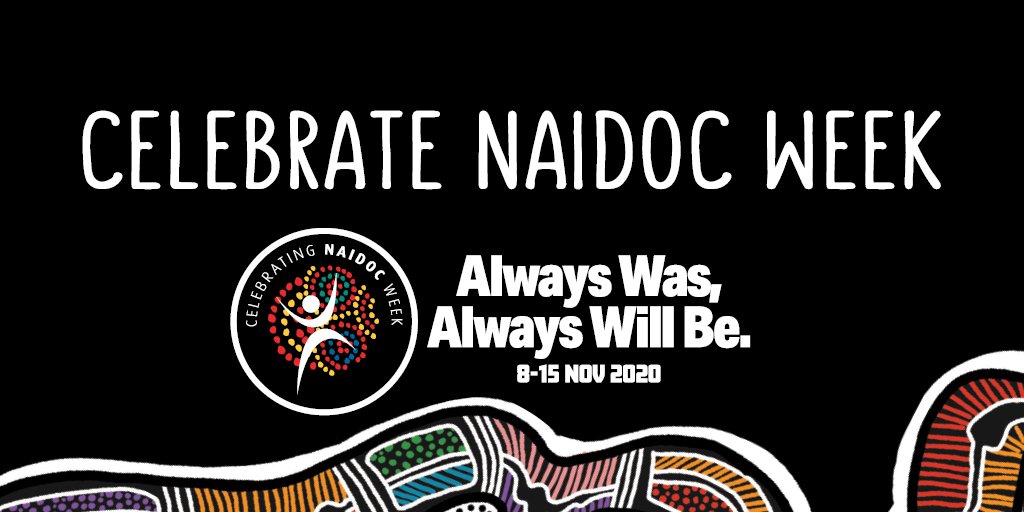 Kakadu (first artists) Kakadu always was and always will be, Aboriginal land.

Kakadu’s rock art is of enormous international significance. It is one of the largest concentrations of rock art sites found anywhere in the world. These art sites provide an outstanding record of natural history as witnessed by Bininj/Mungguy (local Aboriginal people) over 65,000 years. These artworks and countless other sites of significance also serve as a place of education which not only taught Bininj/Mungguy what to eat and hunt but also their individual and collective responsibility to look after country.

Though this long connection was not always reflected in Australian law. After many years of fighting tirelessly for Aboriginal rights, the Aboriginal Land Rights (Northern Territory) Act 1976 was passed and would recognise Bininj/Mungguy ownership of the Kakadu National Park area.

To this day, Bininj/Munnguy continue to protect culture and country while sharing this spectacular World Heritage areas with visitors. 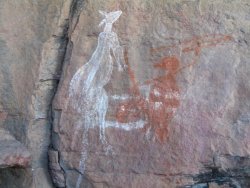 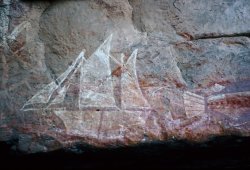 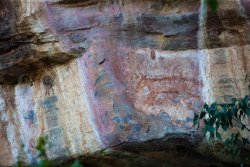 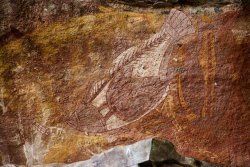 Booderee (first farmers) Booderee always was, always will be, a ‘bay of plenty’ rich in history.

More than 100 Aboriginal sites have been recorded on the Bherwerre Peninsula, some dating back to the stabilisation of the sea level about 6,000 years ago. Most sites are shell middens, but there are also rock shelters, burial sites, ceremonial grounds, stone-flaking sites and axe-sharpening grooves. 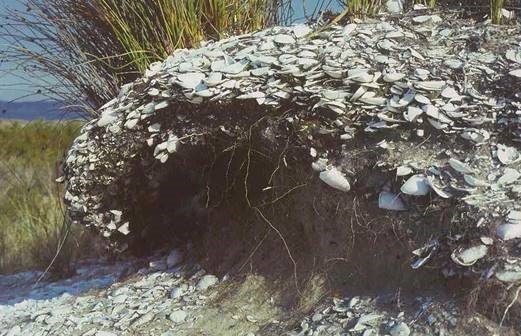 Booderee forms part of a network of sites, places and landscapes that have helped provide generations with the knowledge and understanding of how to properly manage and live with these lands and waters.

Aboriginal people established camps where food and water were abundant and hunting and gathering were bountiful.  This abundance was maintained by careful set of land management practices, Traditional Sciences and a deep understanding of Country.

Seafood has always been a major part of the Booderee diet. Oysters, muttonfish (abalone), pipis and mussels were easily found, especially at low tide. 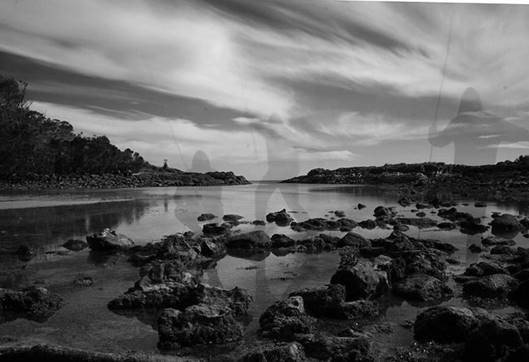 Fish catches were also plentiful with skilful handlines, net fishing and the use of Aquaculture practices, such as fish traps. Fish traps where designed in such a way large fish would be caught and smaller fish could pass though maintaining breading stock. Fishing has always played (and still plays) a major role in the lives of the people of Wreck Bay. 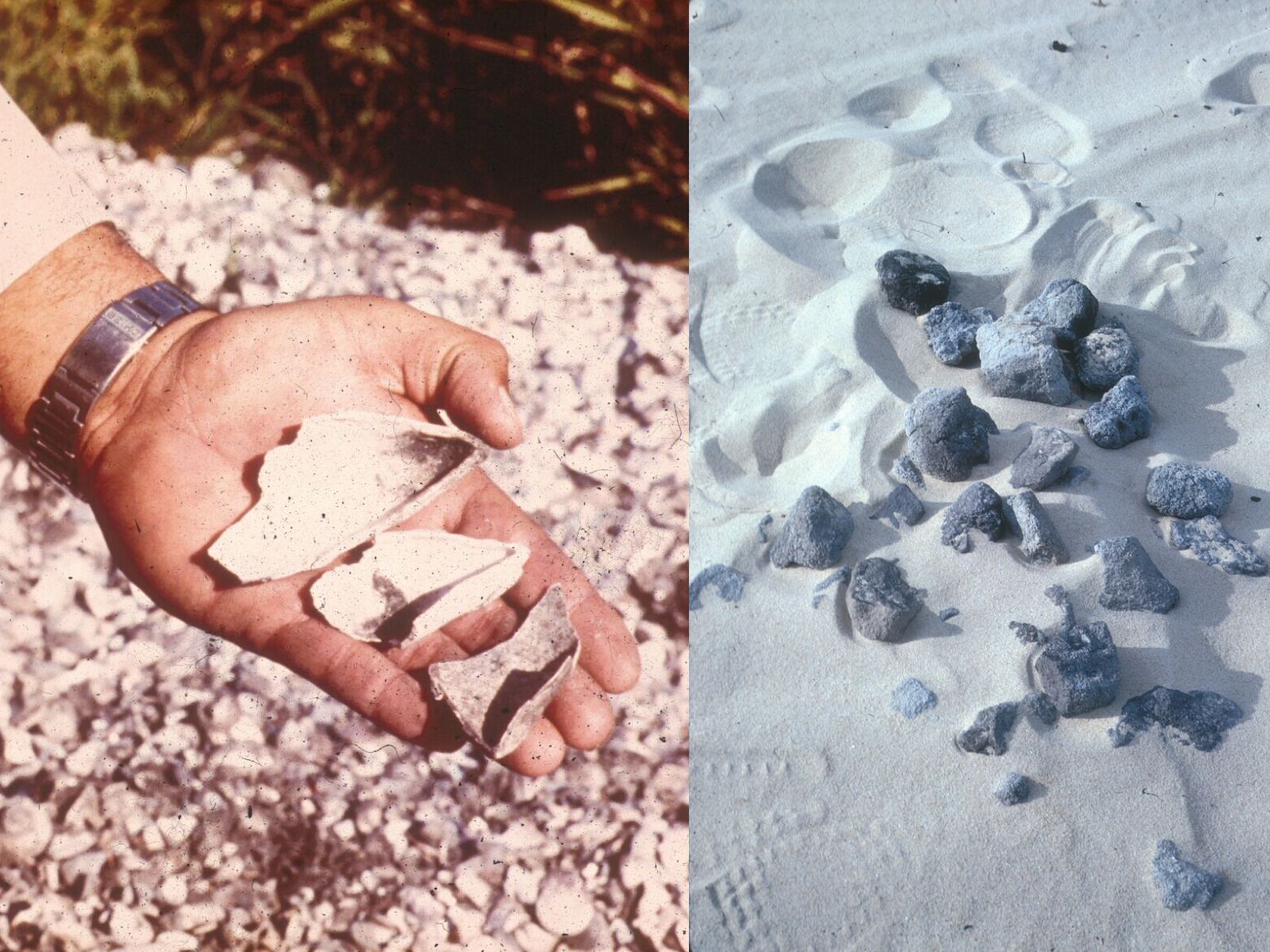 Uluru-Kata Tjuta National Park is a dual World Heritage listed area, protecting not only the physical landscape, but also the detailed and extensive body of cultural knowledge (Tjukurpa) associated with this landscape.

At Uluru, stories, song and law are held in the land, as well as in the hearts and minds of traditional owners. Features in the landscape, for traditional owners, are physical evidence of the travels and struggles of Anangu ancestors, who travelled widely across the land in the very beginning, in the form of people, plants and animals. Therefore, looking after the stories involves looking after the land, and vice versa.

Strong spiritual and material interactions between Anangu and country continue in the park today, through sacred site maintenance, ceremony, storytelling, teaching, cultural burning, sustainable hunting and harvesting, and a range of other practices, including contemporary art.

The way this natural and cultural heritage is protected for future generations at Uluru-Kata Tjuta National Park while also being generously shared with visitors, is testament to Pitjantjatjara and Yankuntjatjara people’s diplomacy, the strength of cultural protocol, and the ongoing relationships and obligations that have tied people and country here together for thousands of years.

Canberra always was and always will be Ngunnawal land. At the Australian National Botanic Gardens (first botanists) we acknowledge Canberra’s first botanists, the Ngunnawal. Through our Indigenous Plant Use Trail, we appreciate and acknowledge Australia’s First Nation’s people and their traditional knowledge of country. 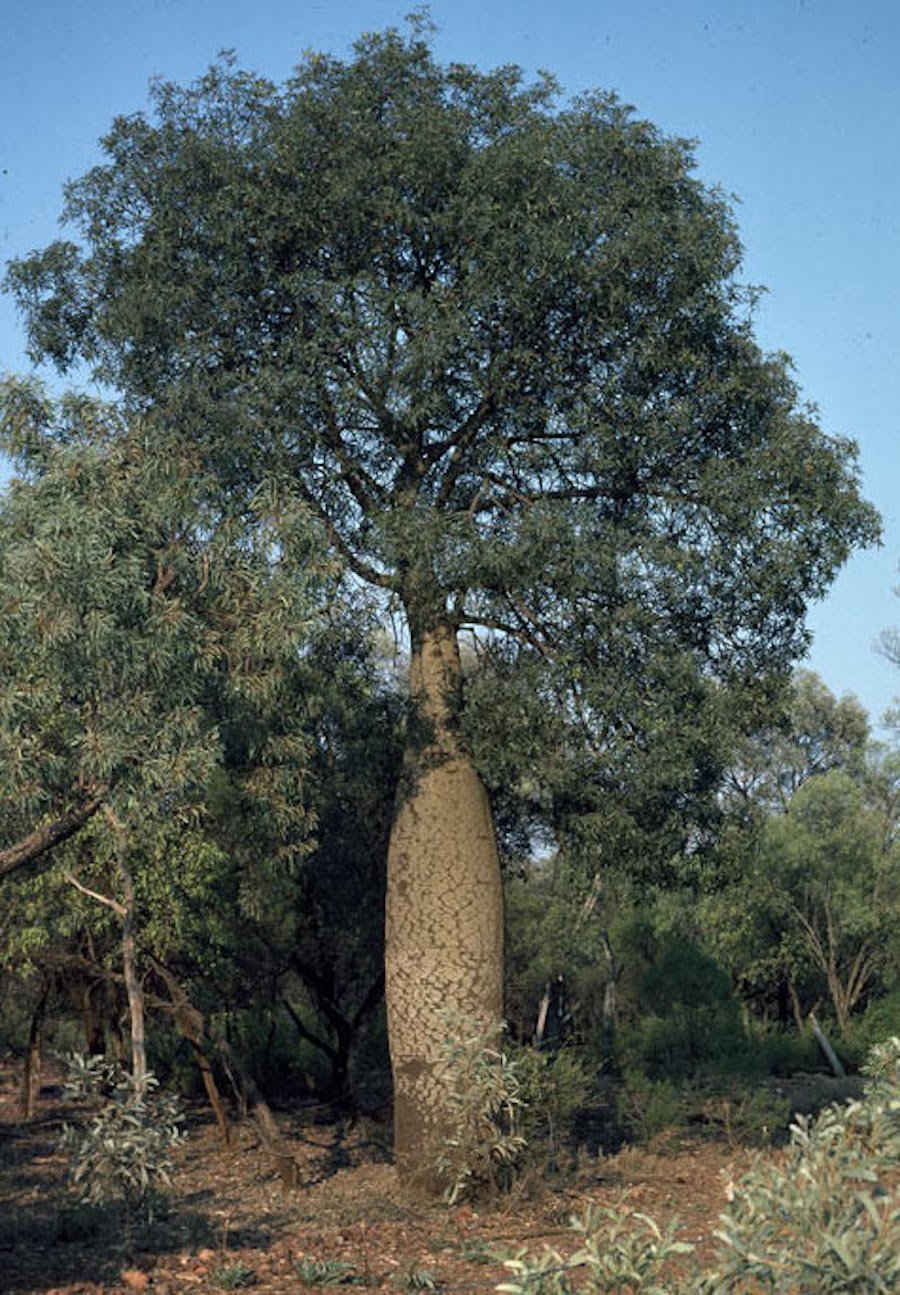 Brachychiton rupestris collects water in its trunk and was used to access water during dry times. Credit G Butler 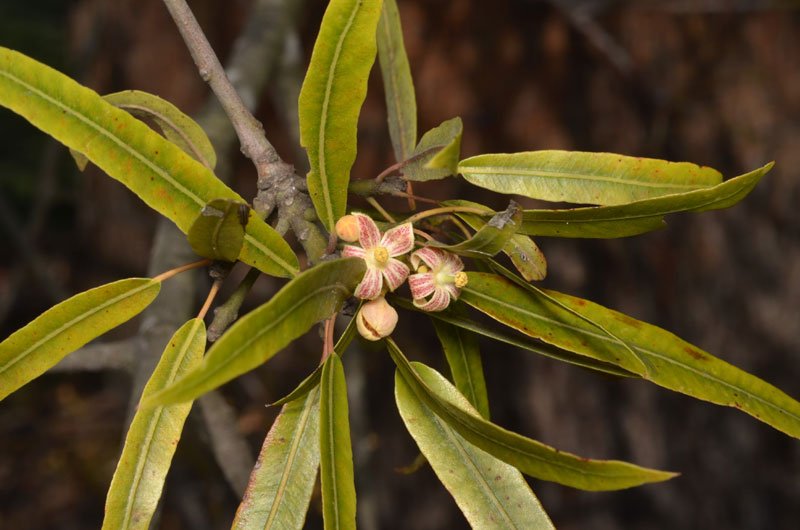 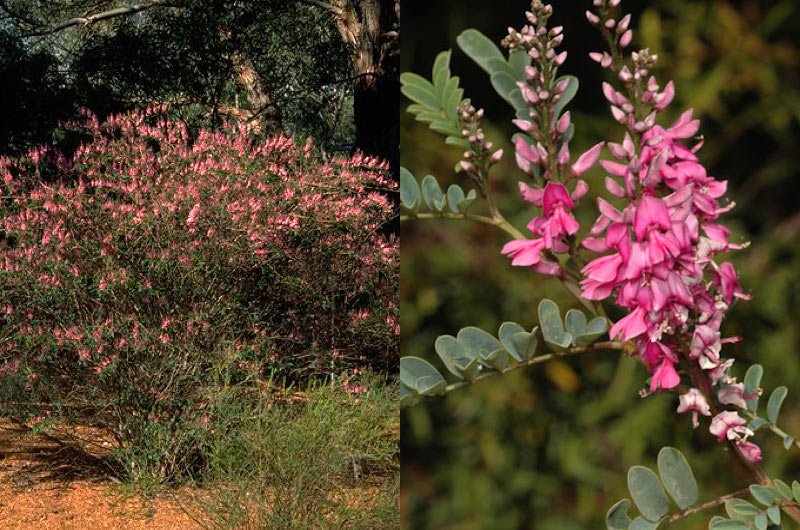 Indigofera australis can be viewed on the Indigenous Plant Use Trail at the Australian National Botanic Gardens. Its leaves and roots can be crushed and mixed with water to attract fish and crustaceans. Credit: Murray Fagg

Worimi People’s continued use of country and its resources has been maintained through traditionally structured lores that guide activities, dictate cultural principles for species, and govern the interactions, collection and use of natural resources.  These strict cultural management strategies provide protection for the environment, while promoting the continued and sustainable use of its resources. These cultural protocols also ensure that country is looked after in an appropriate way and guarantee that the benefits derived from country would be available for future generations. 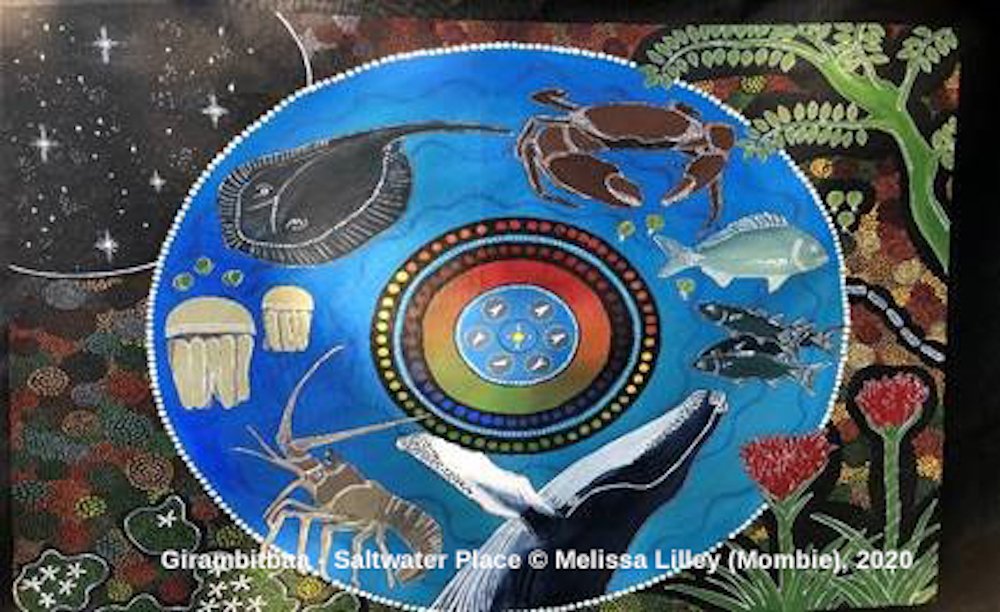 The Girambitbaa – Saltwater Place artwork shows the levels of understanding of interconnectivity that Worimi people have for the environment and its species. The artwork illustrates the connections between land and sea species during different seasons. Wind, land/air/sea temperature, native plant flowering, animal life cycle and phases of the moon and stars were used to inform us of resource availability and associated cultural activities. These observations of the natural environment assisted Worimi people in the timing of sea country activities, particularly resource collection. 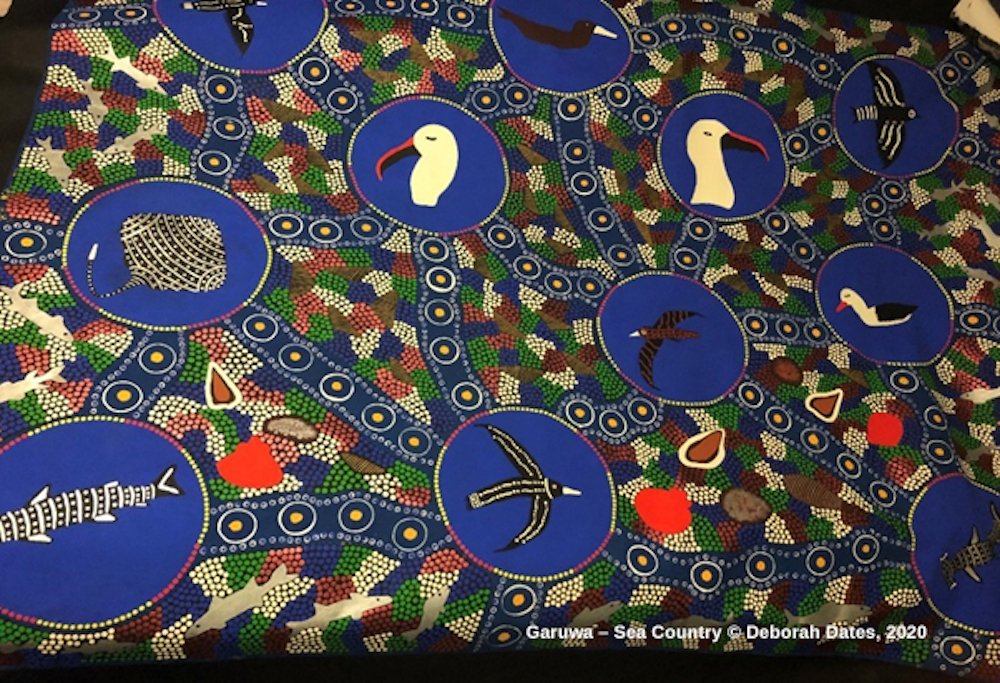 Sea Country illustrates the interconnectivity of species and the environment. Land and sea country work as one, and species utilise features of both depending on their specific needs.