In 2020 a team of Monash University researchers and Parks Australia staff visited the remote Pulu Keeling National Park, an uninhabited island nature reserve about halfway between Australia and Sri Lanka.

The national park is a small tropical outpost 2,900 kilometres from Perth in the Indian Ocean. Few people have heard of its existence and even fewer have ventured to its shores!

To get there, the team travelled by boat from the southern atoll of the Cocos (Keeling) Islands. To come ashore at the park they had to swim through the breaking waves, taking all their equipment with them in water-tight (or so they hoped!) barrels.

This swim was especially nerve-wracking given the high-end technology stored within the barrels, including several drones for an aerial monitoring program, camera traps, a small portable generator and field-essential laptops.

Researcher Karina Sorrell, from the School of Biological Sciences at Monash University, says “being on the island is like stepping back in time – the forest reaches right to the shoreline, the wildlife seems oblivious to humans and the sounds of seabirds fill the air.”

In the absence of humans, this tropical island forest has been able to develop largely undisturbed and the resultant biodiversity is a sight to behold. 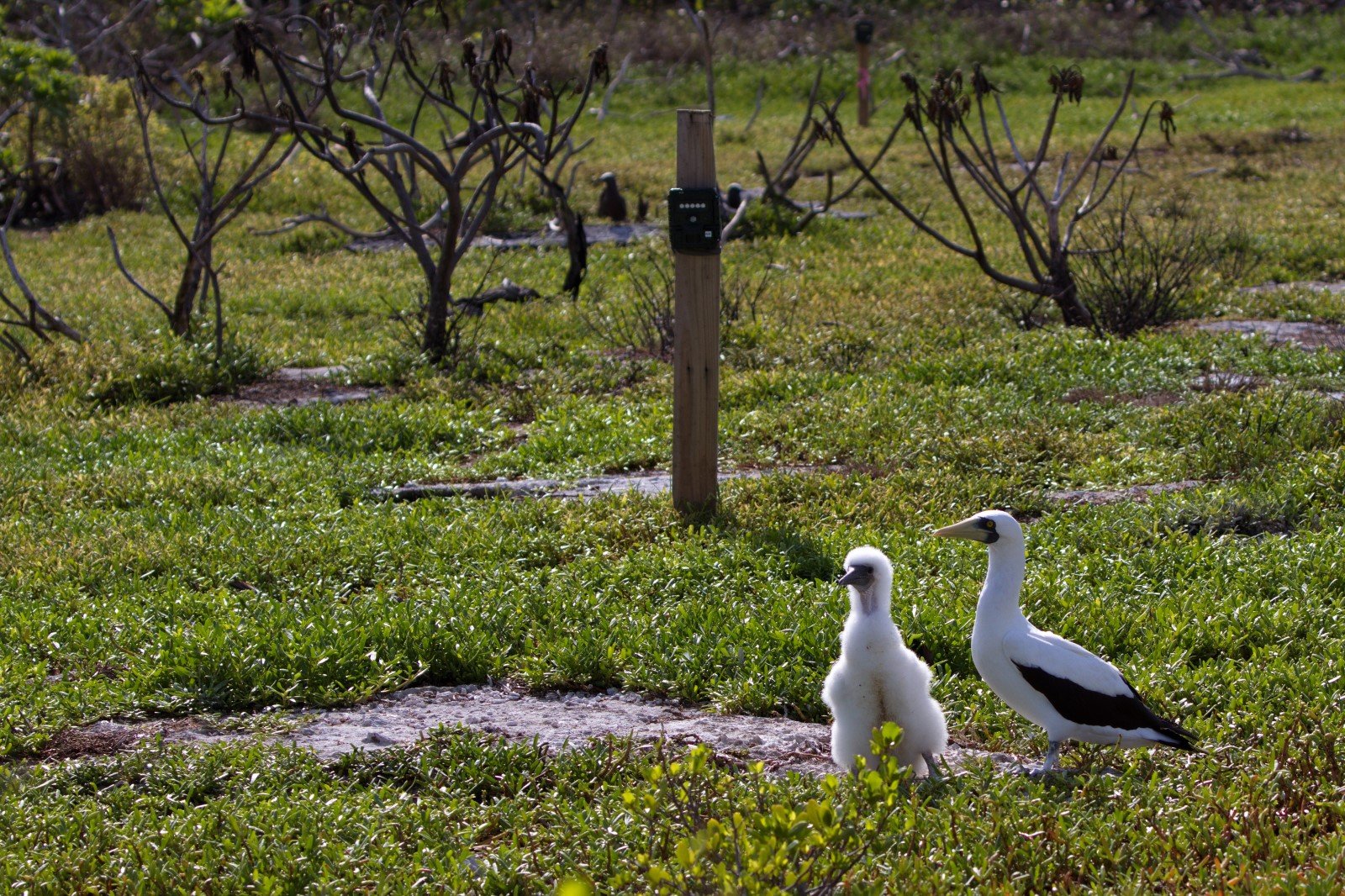 The island is a place of international conservation significance. Credit: Karina Sorrell

The island serves as an especially important site for breeding seabirds - amongst other species, thousands of frigatebirds and boobies soar overhead. 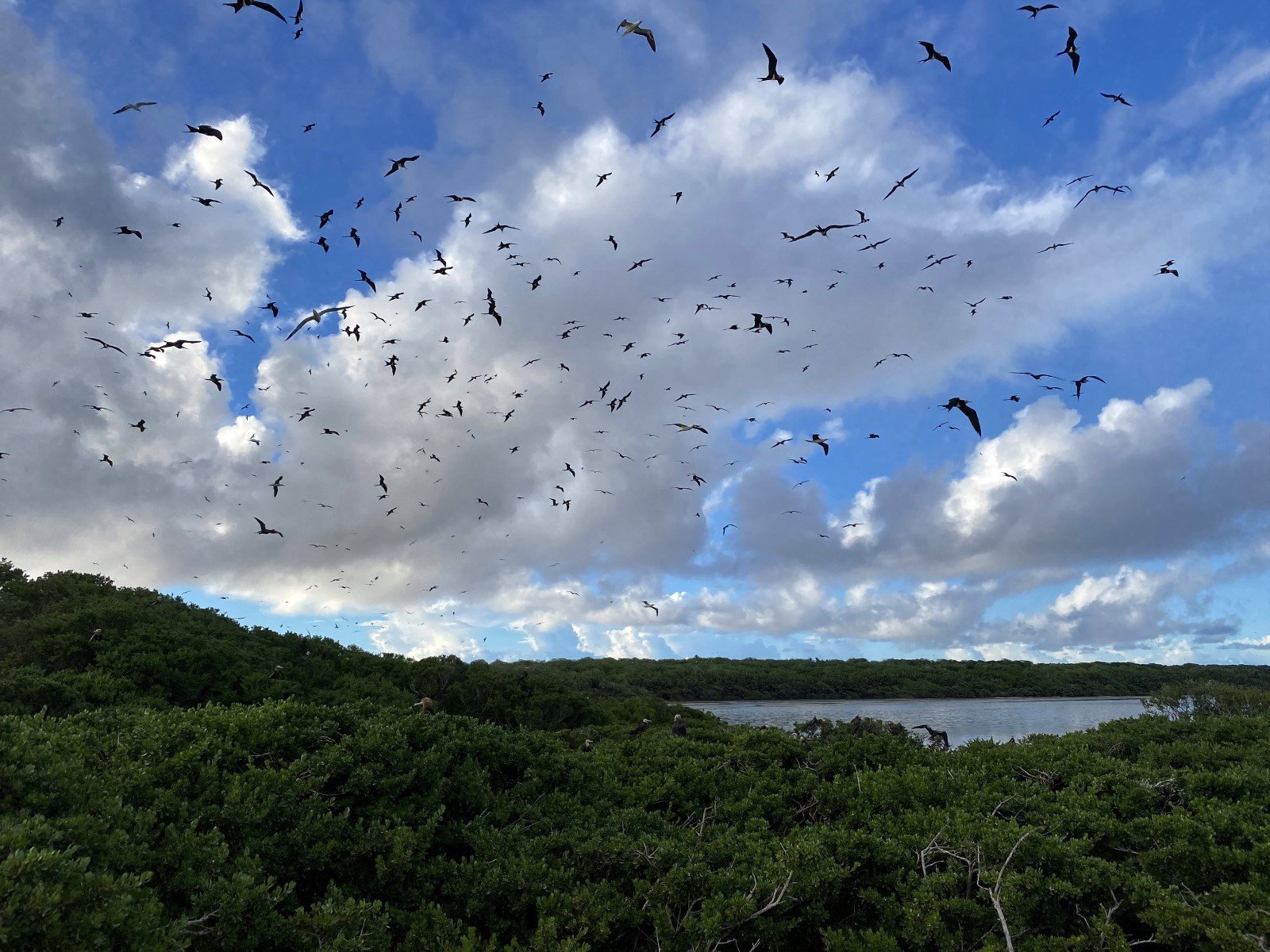 Head ranger of Pulu Keeling National Park, Trish Flores, says the team needed to visit the island to conduct surveys of the breeding seabirds, to trial baiting methods for the invasive Yellow Crazy Ant and to improve understanding of the island’s ecosystem.

A key objective of the fieldwork was to quantify the size of seabird colonies by flying drones overhead.

Project leader Dr Rohan Clarke, from the School of Biological Sciences, Monash University says “our mission was to then compare these aerial counts of nesting seabirds to counts obtained from ground-based teams, to identify the most appropriate monitoring approaches for this site into the future.”

Previous work by the team at Monash has shown that drones are an ideal tool to monitor ground nesting seabirds, so here the goal was to extend this to determine if the same method could be used to monitor seabirds that nest in trees.

Pulu Keeling is approximately 2 km long and 1 km wide. Whilst much of the island consists of tall Pisonia forest, there is also a large hypersaline lagoon in the centre of the island.

The team called the island home during two 10-day expeditions in December 2019 and February 2020. Their base was a minimal impact campsite positioned just inside the forest, behind the beach – a perfect location for cooling off with a swim after a long day of work!

Field days began at sunrise by either walking through the forest, climbing through dense, tangled vegetation, walking around the beaches or along the edge of the swampy lagoon.

“The majority of my time was spent flying a drone, to obtain as much aerial imagery of the seabird colonies as possible, but being in such a spectacular location meant that it hardly felt like work!” says Karina. 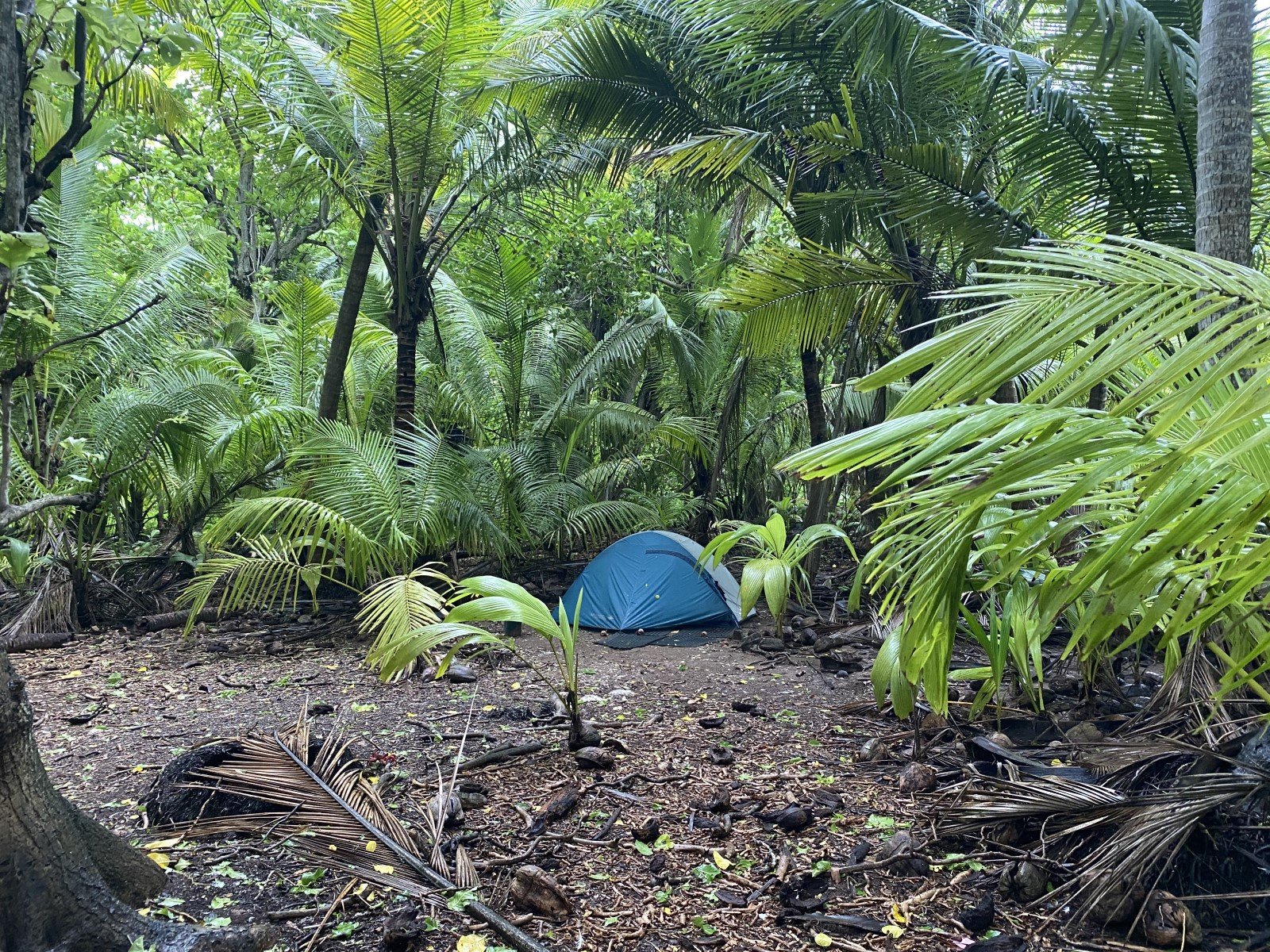 During the surveys, a total of 31 bird species were observed on the island, including the many breeding seabirds, the critically endangered Cocos buff-banded rail and small numbers of migratory shorebirds.

Occasional migrant songbirds that had overshot distant south-east Asia forests to find themselves in the middle of the Indian Ocean were also spotted.

Wherever one looked on the ground, red hermit crabs were going about their business, whilst giant, prehistoric-looking robber crabs were a rarer treat to see. 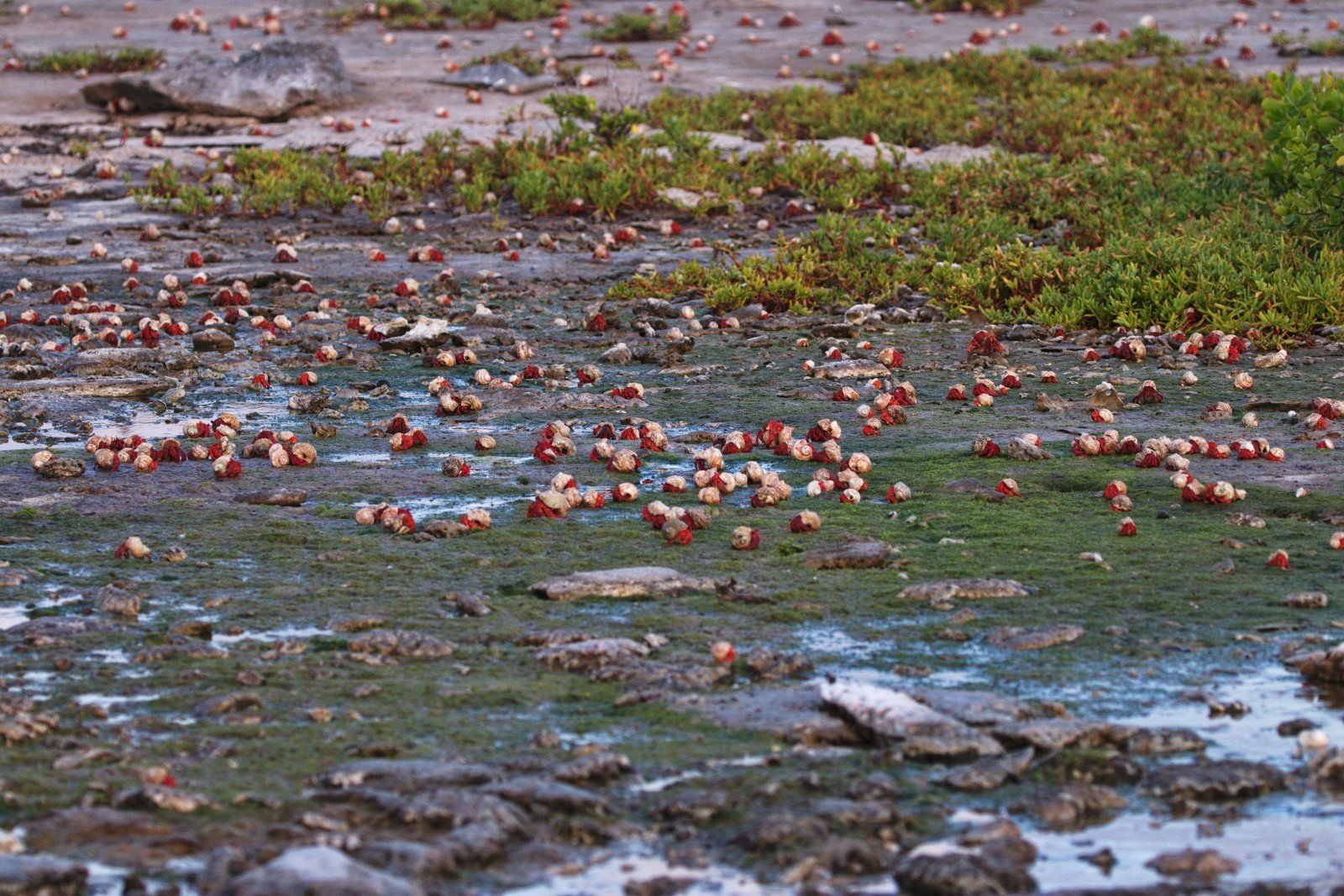 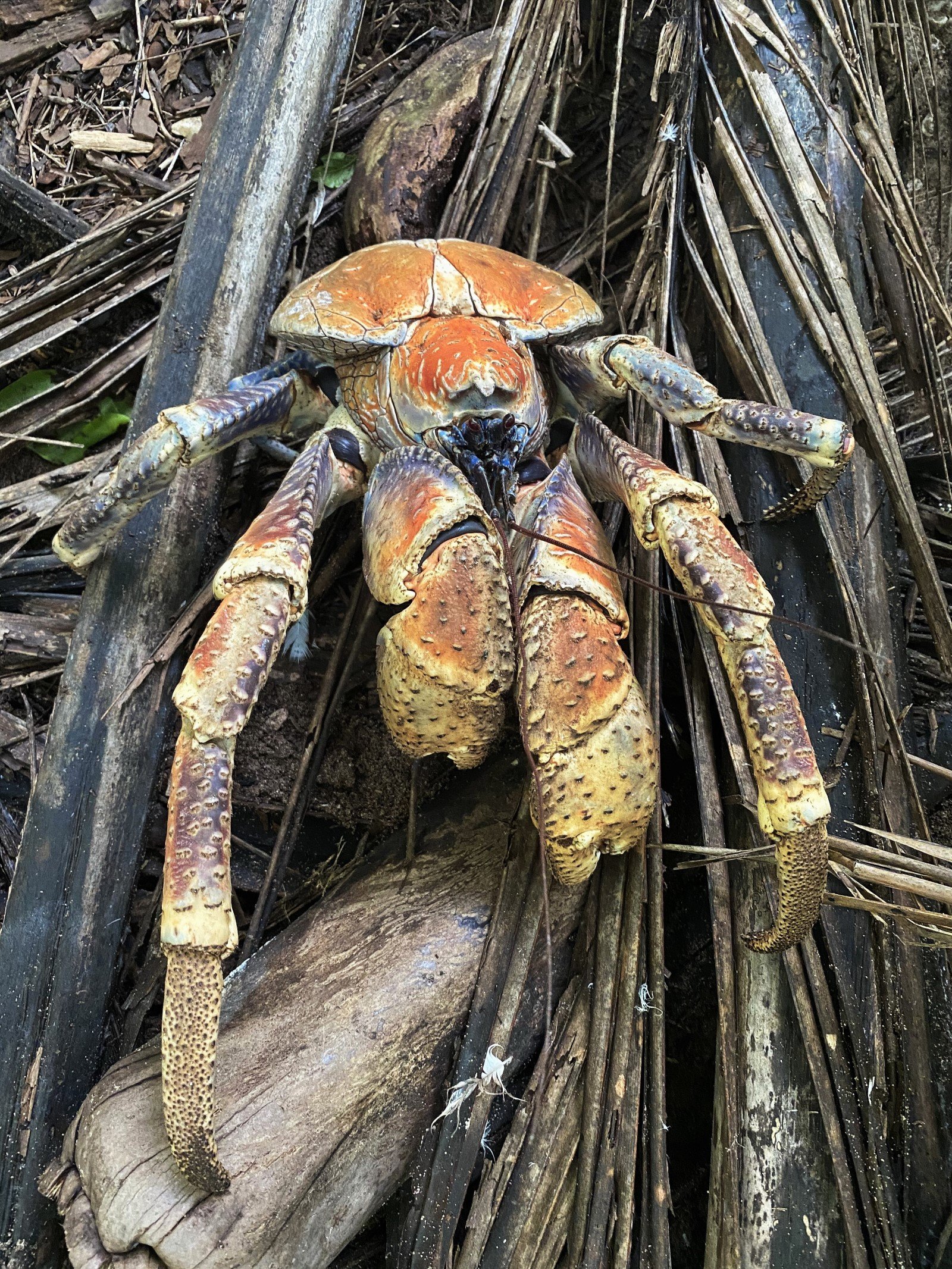 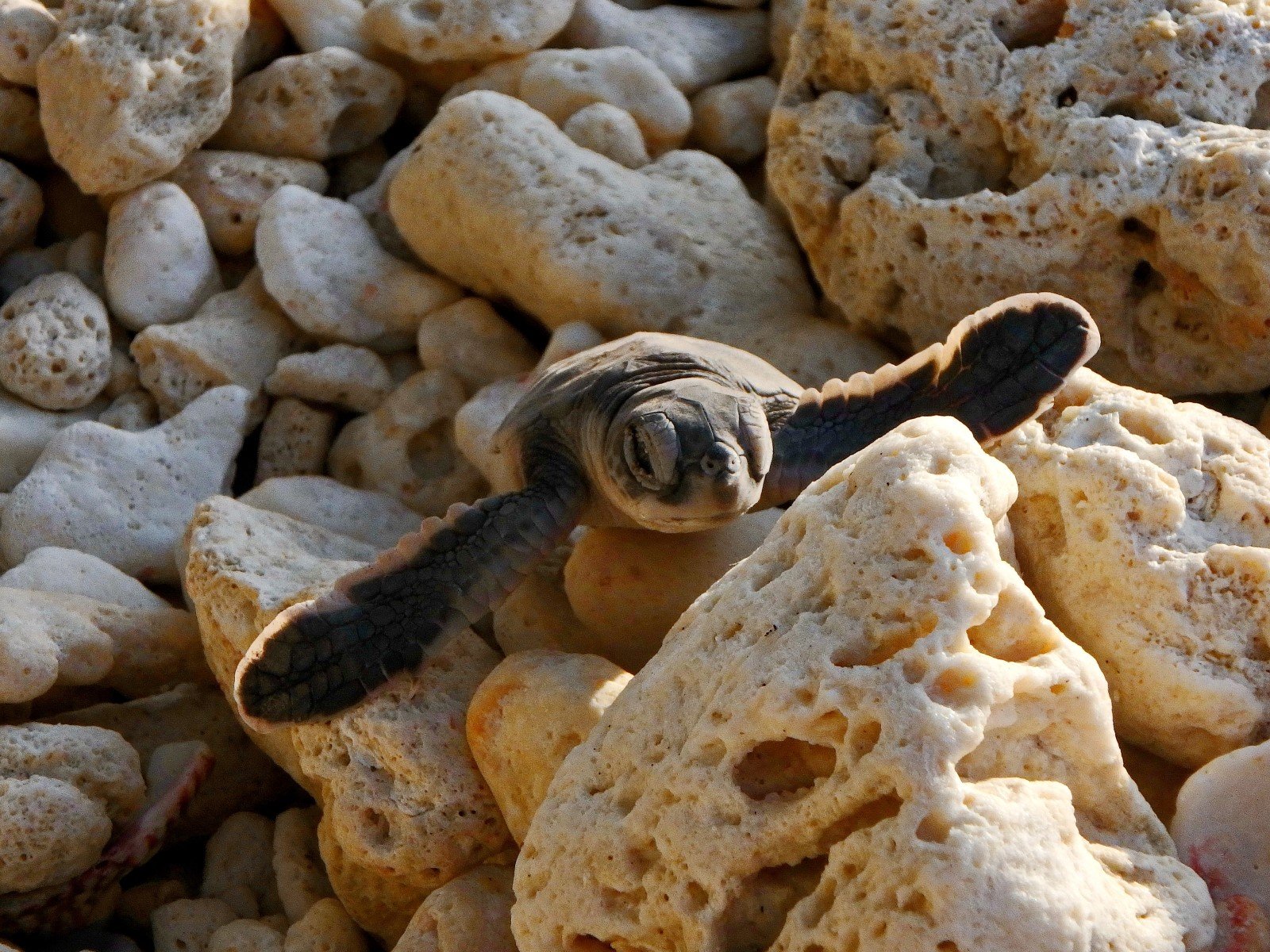 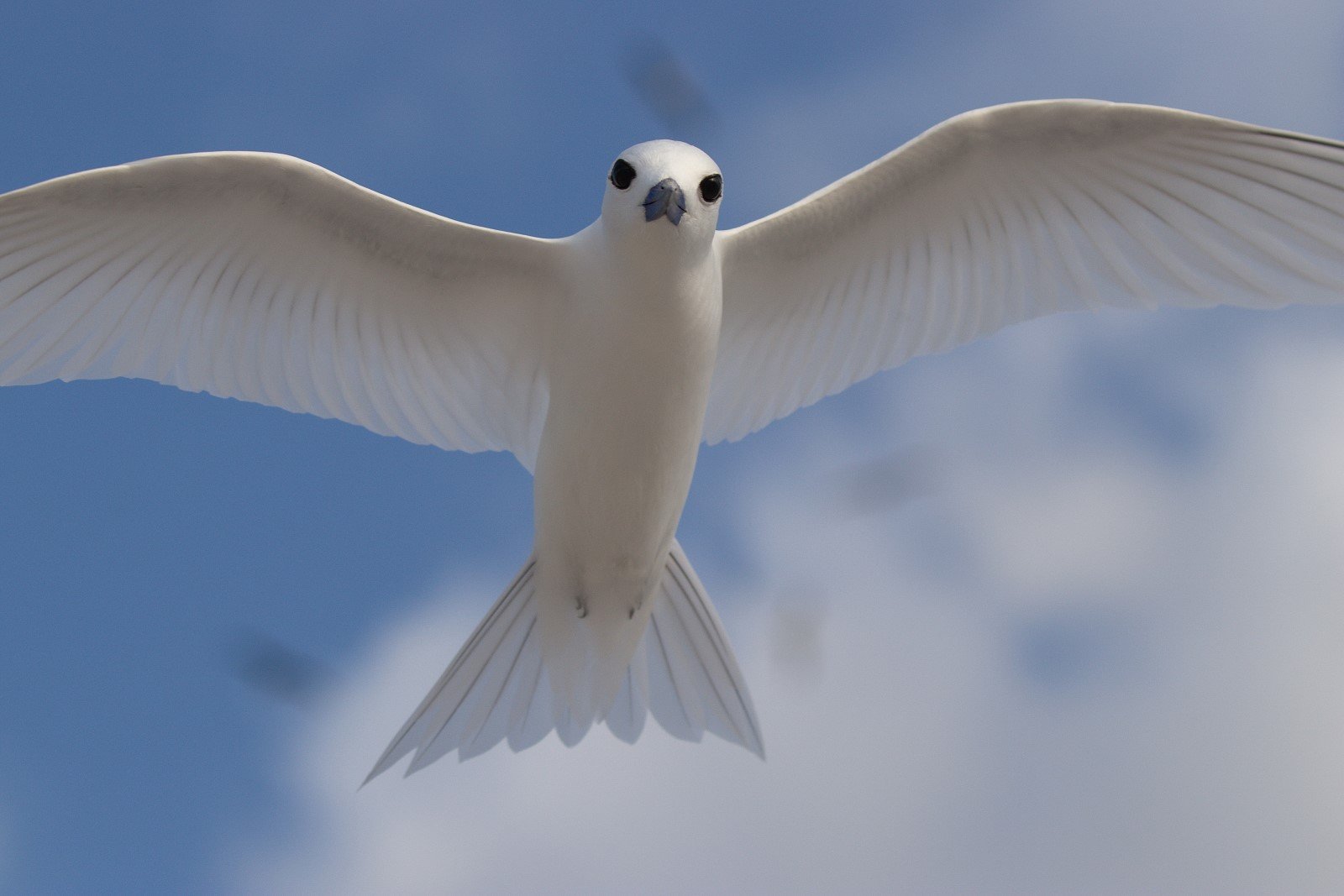 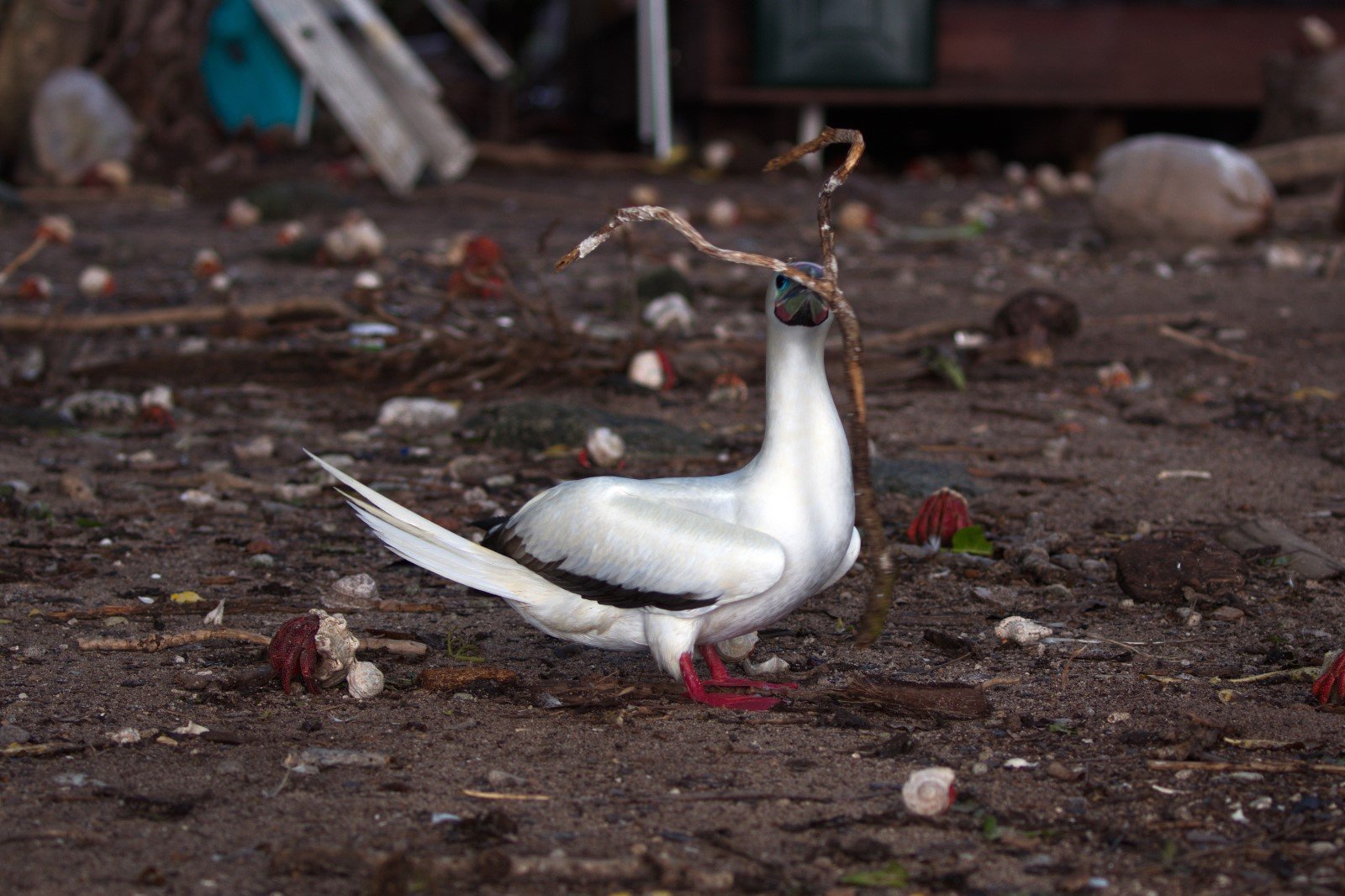 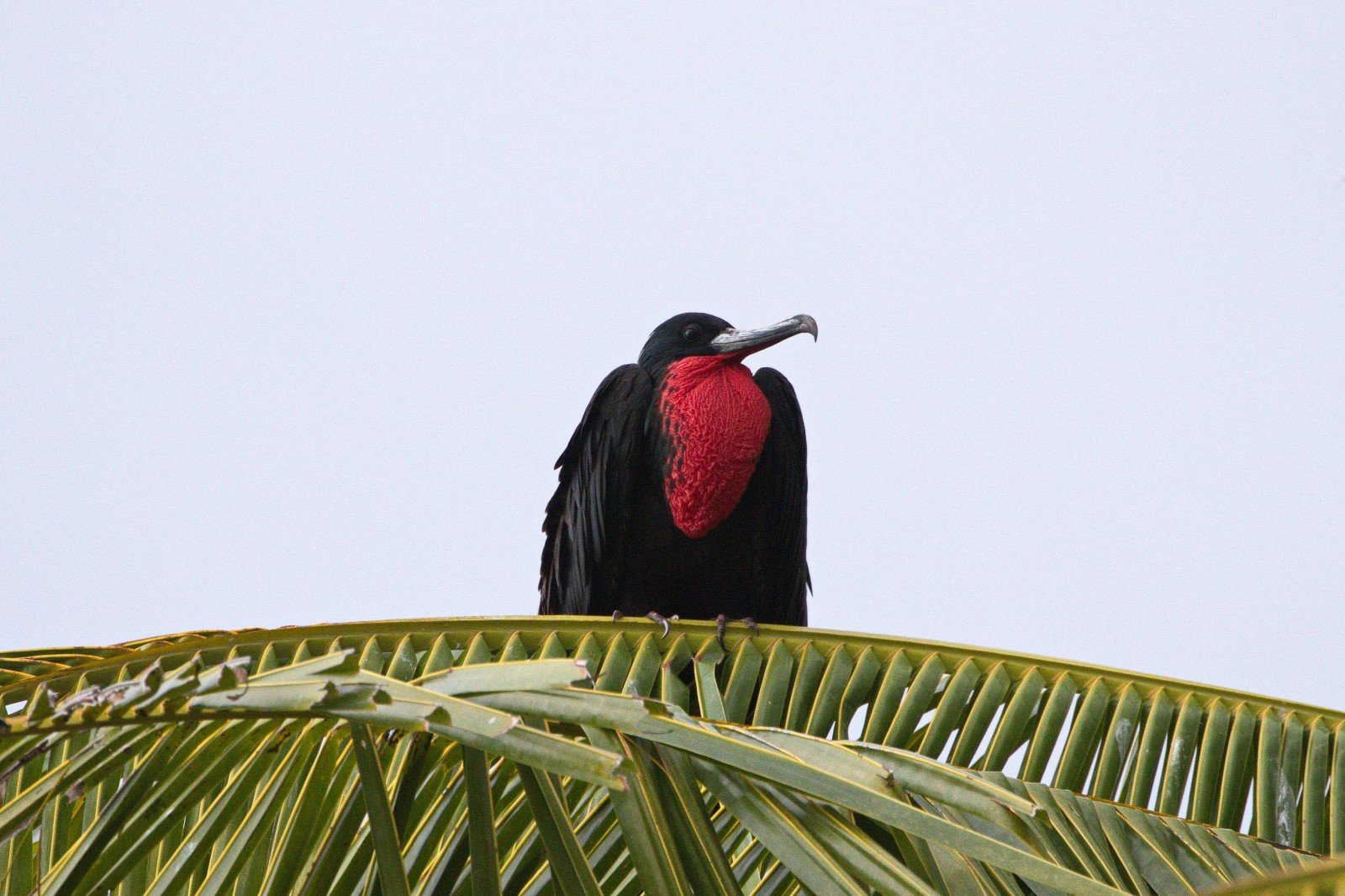 Looking out to sea, green sea turtles occasionally broke the surface for a breath, while the fins of grey reef sharks cruising along the shore were common sights.

“We were even treated to a sighting of a sperm whale as it rested at the surface between deep dives just a kilometre or two offshore!” says Karina.

Both expeditions were deemed a great success, and as a bonus the experience was thoroughly enjoyed by all who ventured there.

“Monitoring programs such as these are crucial to improve our insight, and by extension to refine management actions that protect the island’s unique biodiversity” said Rohan.

With the conclusion of fieldwork, Pulu Keeling has again been left to a cacophony of seabirds and other wildlife that reside there.

Now back home, the team have been working through the thousands of aerial images and analysing the data to guide future management of this special place.

“The island is a testament to what nature can be. As intact ecosystems such as those at Pulu Keeling become increasingly rare, we need to ensure we do everything we can to conserve these incredible places”, says Trish. 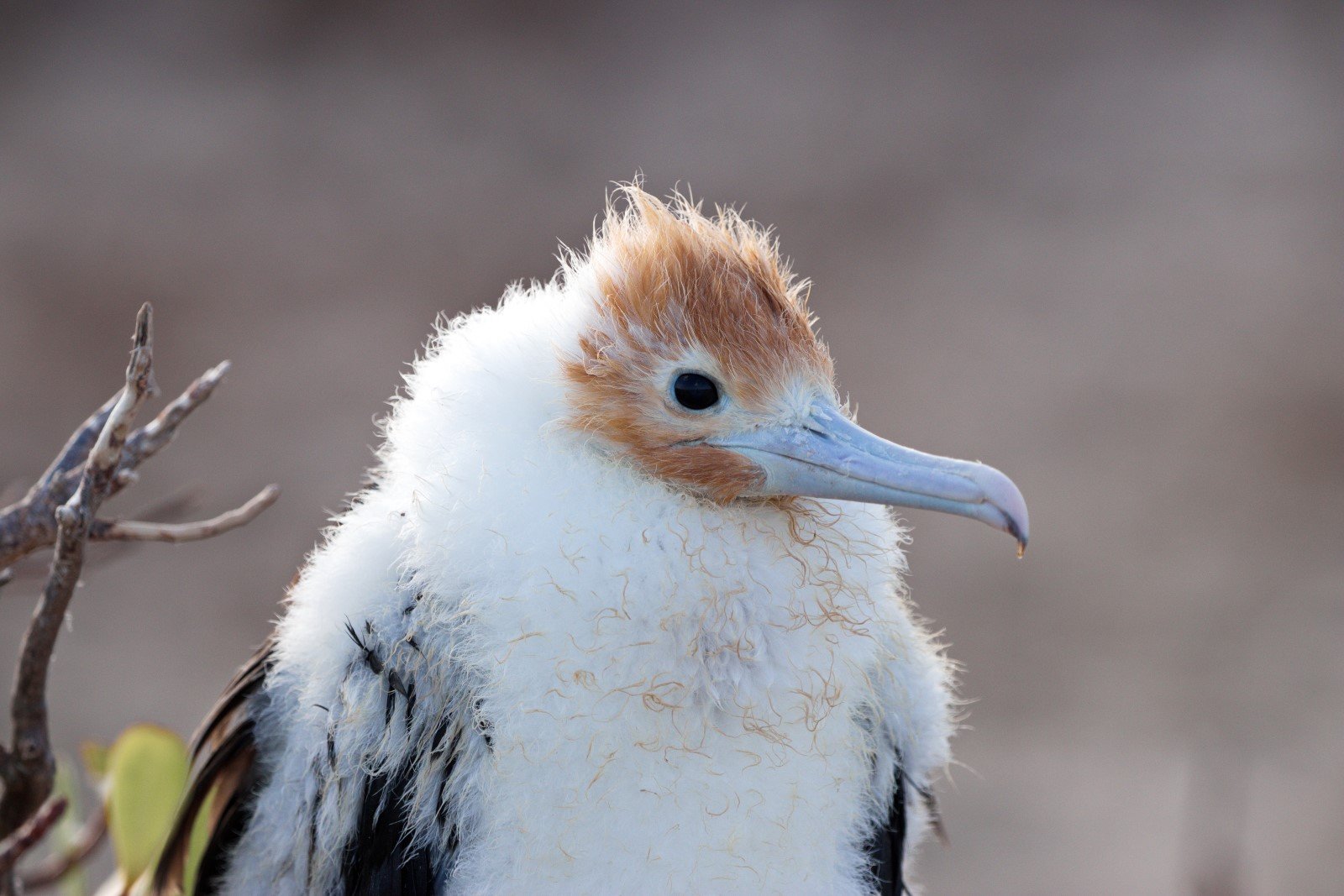 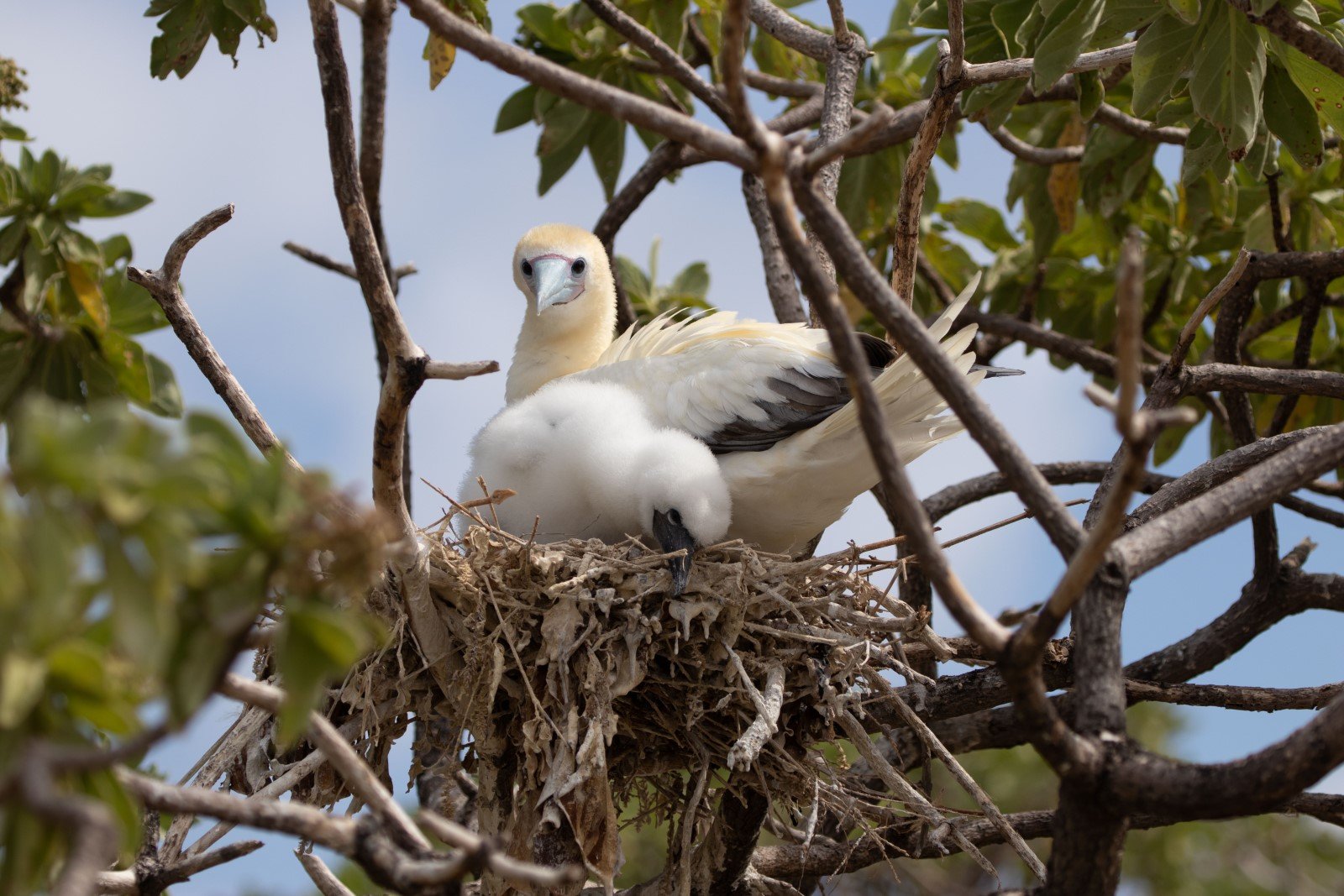 The cacophony of seabirds and wildlife at Pulu Keeling enjoy having the island to themselves. Credit: Karina Sorrell