A battle to secure our nation’s biodiversity for future generations is raging and Parks Australia is on the front lines.

We manage some of Australia’s most iconic and remote national parks where some of our most threatened plant species exist.

Alongside our role to share some of the most incredible landscapes and beautiful sites on earth with visitors from all around the world, our staff work tirelessly to conserve unique species.

They play a pivotal role in the fight to retain Australia’s plant biodiversity. Their work is securing the future of threatened plant species for future generations.

This International Day for Biological Diversity, we’re sharing the stories of six plants that have been saved by the conservation work in our amazing national parks. We’re part of the solution #ForNature. 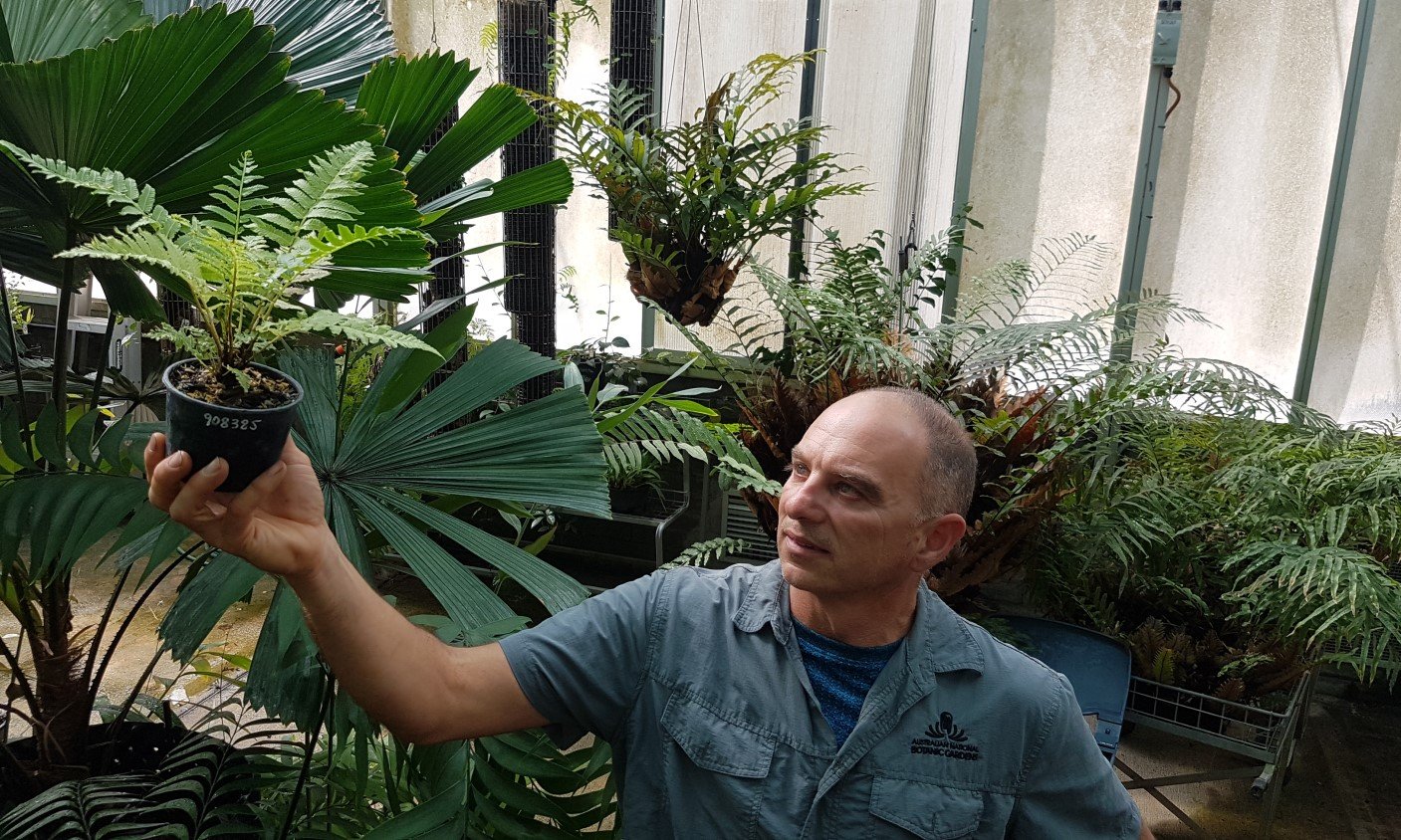 In a Canberra hothouse more than 5,000 kilometres from its Christmas Island home, Parks Australia staff have propagated one of Australia’s rarest ferns.

The critically endangered Dales Waterfall Fern (Pneumatopteris truncata) has as few as 50 individuals in the wild, but work is underway to secure its future.

The native fern can only be found at a Ramsar-listed wetland in Christmas Island National Park known as The Dales.

Following a dry period across 2018 and 2019, the population of ferns at both Hughs and Andersons Dale declined considerably. Monitoring did not detect any individuals at Hughs Dale, and only 12 individuals at Andersons Dale. These numbers are in strong contrast to the 400-strong population reported in 2016, when plants were up to 1.5 metres tall, and tourists were regularly seen snapping photos with the ferns.

A wet April in 2021 provides hope for natural recruitment at the Dales, but the reserve population now growing at the ANBG provides extinction insurance should the Christmas Island population continue to decline. 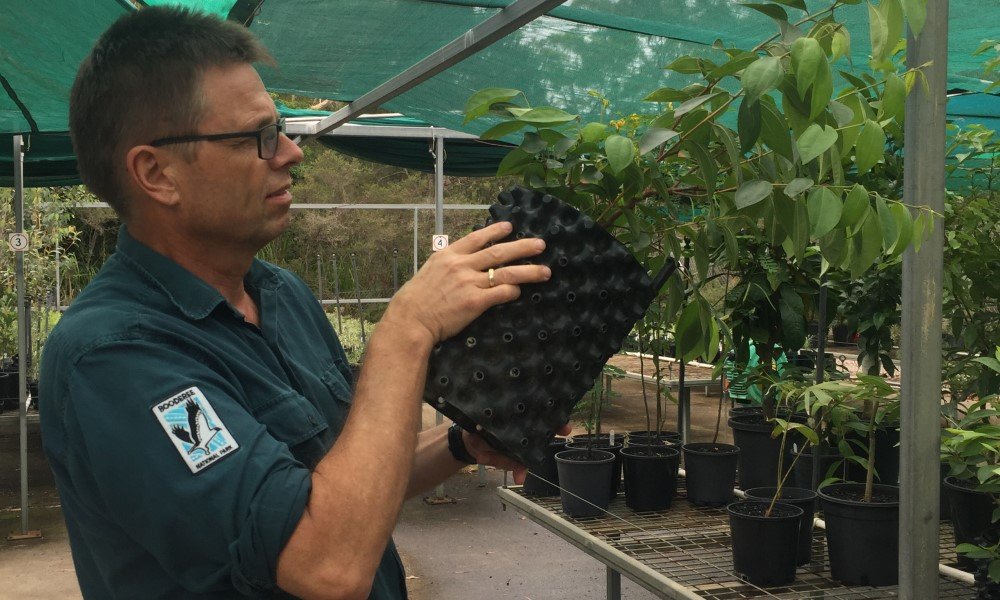 Scrub turpentine (Rhodamnia rubescens) is a critically endangered member of the myrtle family first detected on the NSW Central Coast in 2010. Myrtle rust has ravaged the species that was barely hanging on around Booderee National Park and the NSW South Coast before the Black Summer bushfires devastated much of the remnant population.

Fortunately, Booderee Botanic Gardens staff had taken cuttings from the remnant populations within Booderee National Park, as well as seven other sites along the south east coast of NSW, between 2017 and 2019 to secure material for an ex situ collection at the botanic gardens.

This serendipitous timing meant that conservation efforts may have saved the population from extinction. 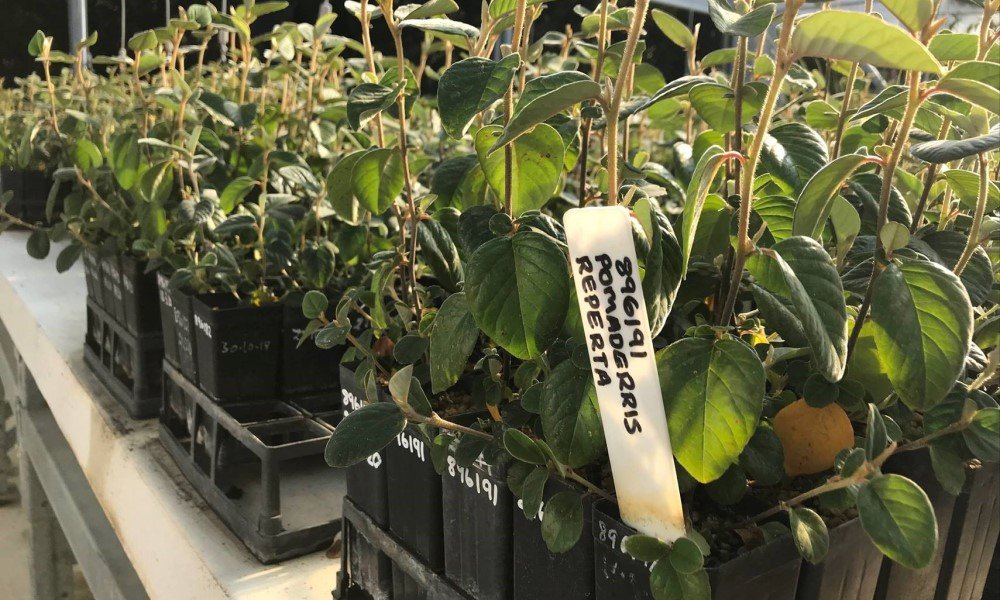 Denman Pomaderris (Pomaderris reperta) is a critically endangered shrub that grows 1 to 3 metres tall in a small number of sites along a single ridgeline near Denman in the upper Hunter Valley in NSW.

A collaboration between the Australian National Botanic Gardens and the NSW Government’s Saving our Species program, sponsored by Glencore, has given new life to a species at risk of extinction.

Seeds were collected at Myambat in Denman in 2016 from 23 different existing plants and the staff at the gardens germinated approximately 600 new plants using protocols developed from germination research on a range of Pomaderris species at the National Seed Bank.

450 plants were translocated to the Denman site, including a school planting with students from local primary schools in the region, St Joseph’s Primary School and Denman Public School, and the remainder were planted into the living collection at the Australian National Botanic Gardens.

Fortunately, the National Seed Bank has a collection of seeds of the Denman Pomaderris and this in conjunction with the horticultural expertise of the gardens Living Collections team, could produce a renewable population for the species if the wild population failed to recover. 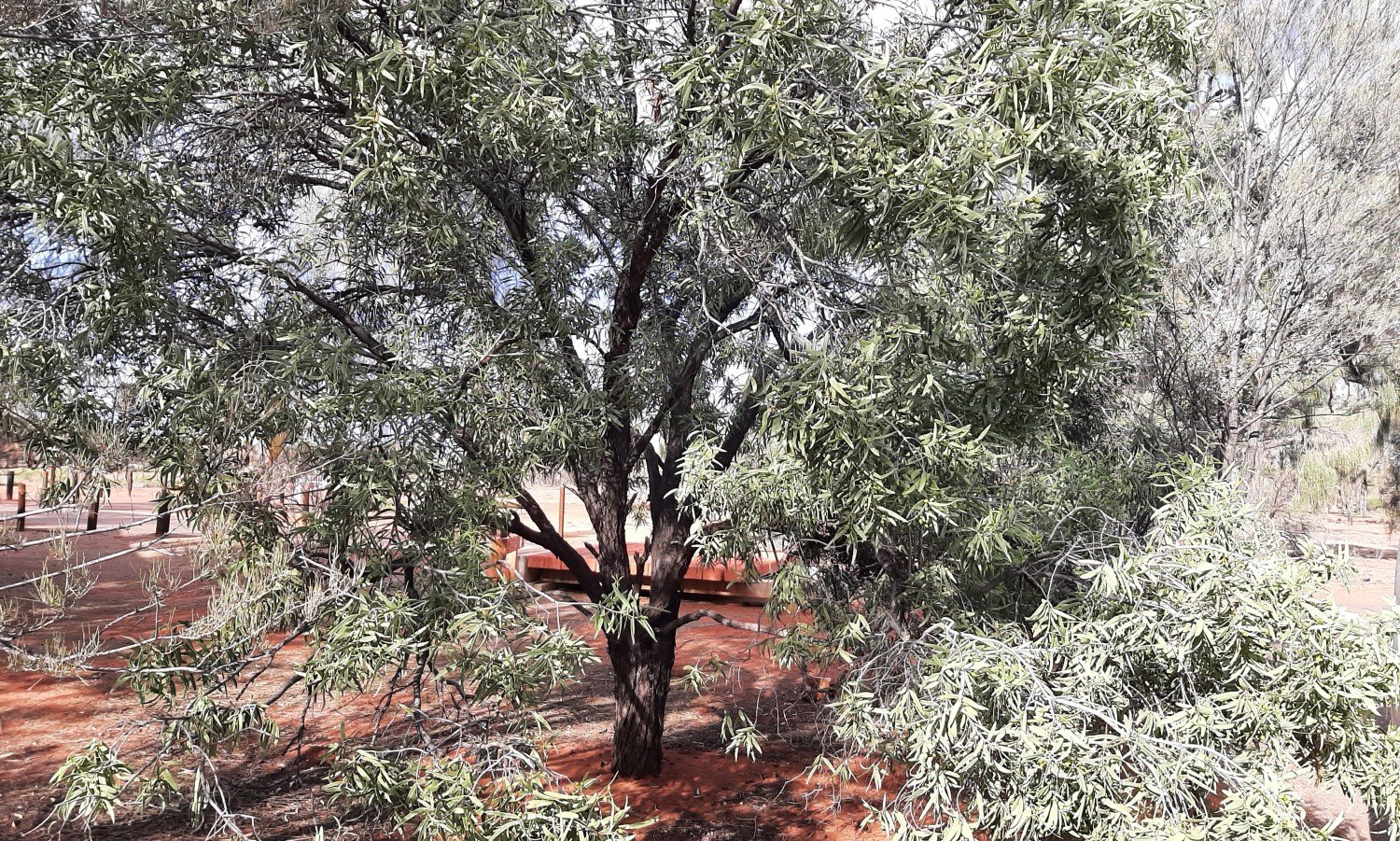 Mangata (Santalum acuminatum), or desert quandong, is listed as vulnerable in the Northern Territory under the Territory Parks and Wildlife Conservation Act 1976.

The species is widespread across southern Australia and is not listed under the Commonwealth Environment Protection and Biodiversity Conservation (EPBC) Act 1999. The Northern Territory population represents the northernmost extent of this species’ range, with most populations consisting of only a few (less than 10) plants.

Mangata produces a highly prized edible fruit for Anangu (People of the Western Desert Region). Mangata Tjukurpa (Dreaming) is strong in the park and therefore is of great cultural significance. There are currently only eight recorded wild living Mangata trees scattered throughout Uluru-Kata Tjuta National Park.

Prior to 2016, seeds were collected from Mangata trees within the park and sent to the National Seed Bank in the Australian National Botanical Garden in Canberra. From those seeds, 16 individual saplings were propagated for the purpose of translocation (with host plants) back to Uluru-Kata Tjuta National Park.

Moving forward, the plan is to re-establish a nursery at Uluru-Kata Tjuta National Park and propagate the Mangata locally. 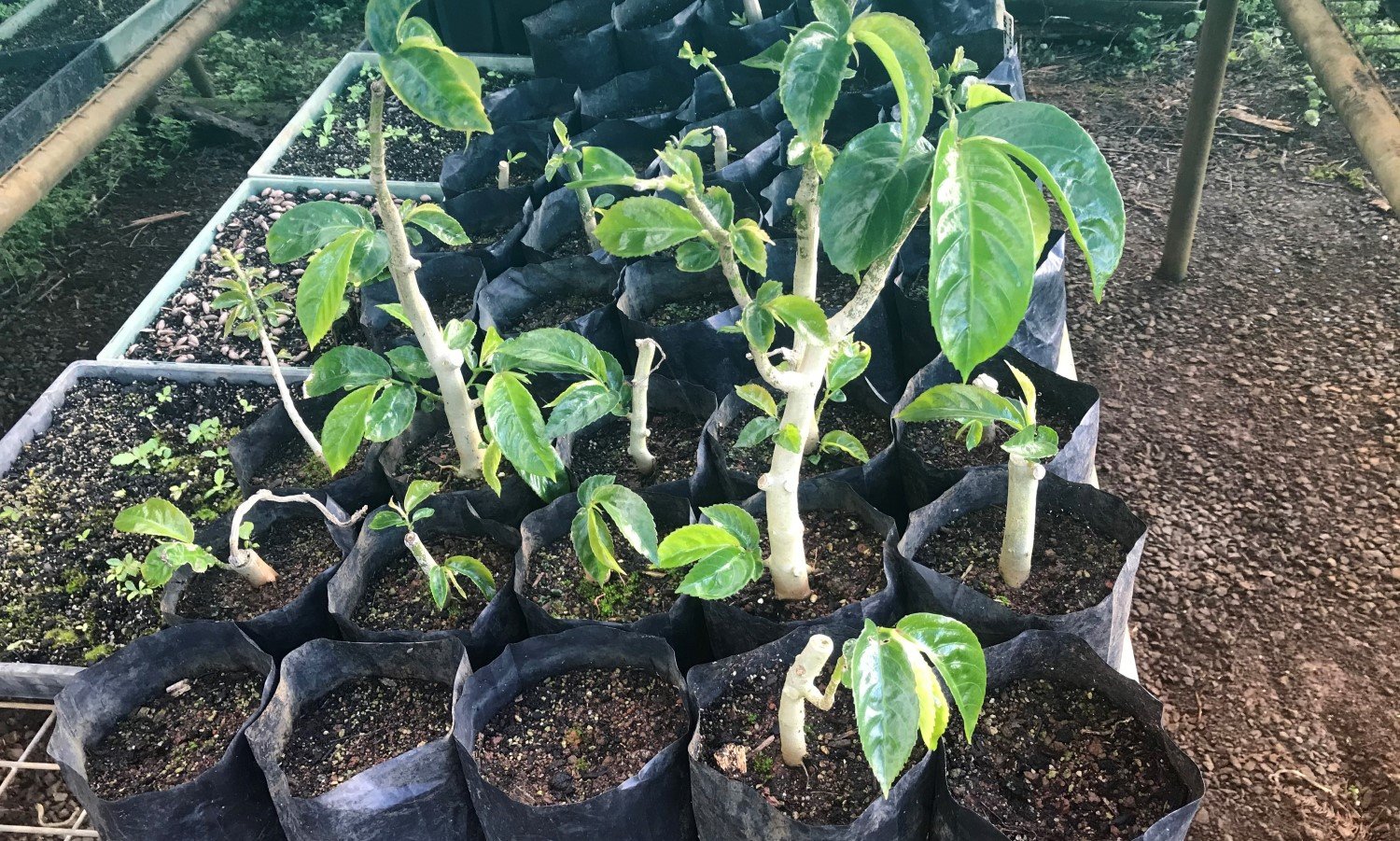 The Mountain Procris (Elatostema montanum) is endemic to Norfolk Island. It is listed as critically endangered under the Environment Protection and Biodiversity Conservation (EPBC) Act 1999.

It is a small shrub which belongs to the nettle family. It is a fleshy, succulent-stemmed perennial herb with a straggling structure which grows to 1 metre tall.

Only 14 exist in the world naturally, and they are all within Norfolk Island National Park at two locations in the Mount Pitt area.

They are particularly fussy when it comes to where they lay down their roots, requiring steep rocky banks and cliffs in shaded gullies that do not dry out.

In 2003, the park reported a total population of 76 mature plants, with six plants in one area and 26 in the other. Some cuttings collected in 2016 were badly damaged by none other than an endangered Norfolk Island Green Parrot!

Nursery staff have been experimenting with growing this species from cuttings, with positive results.

Staff have planted 16 out into the park already and all are thriving.  A further two have been planted in secure locations outside the park which are growing well.

There are currently approximately 30 at the nursery that are ready for planting. 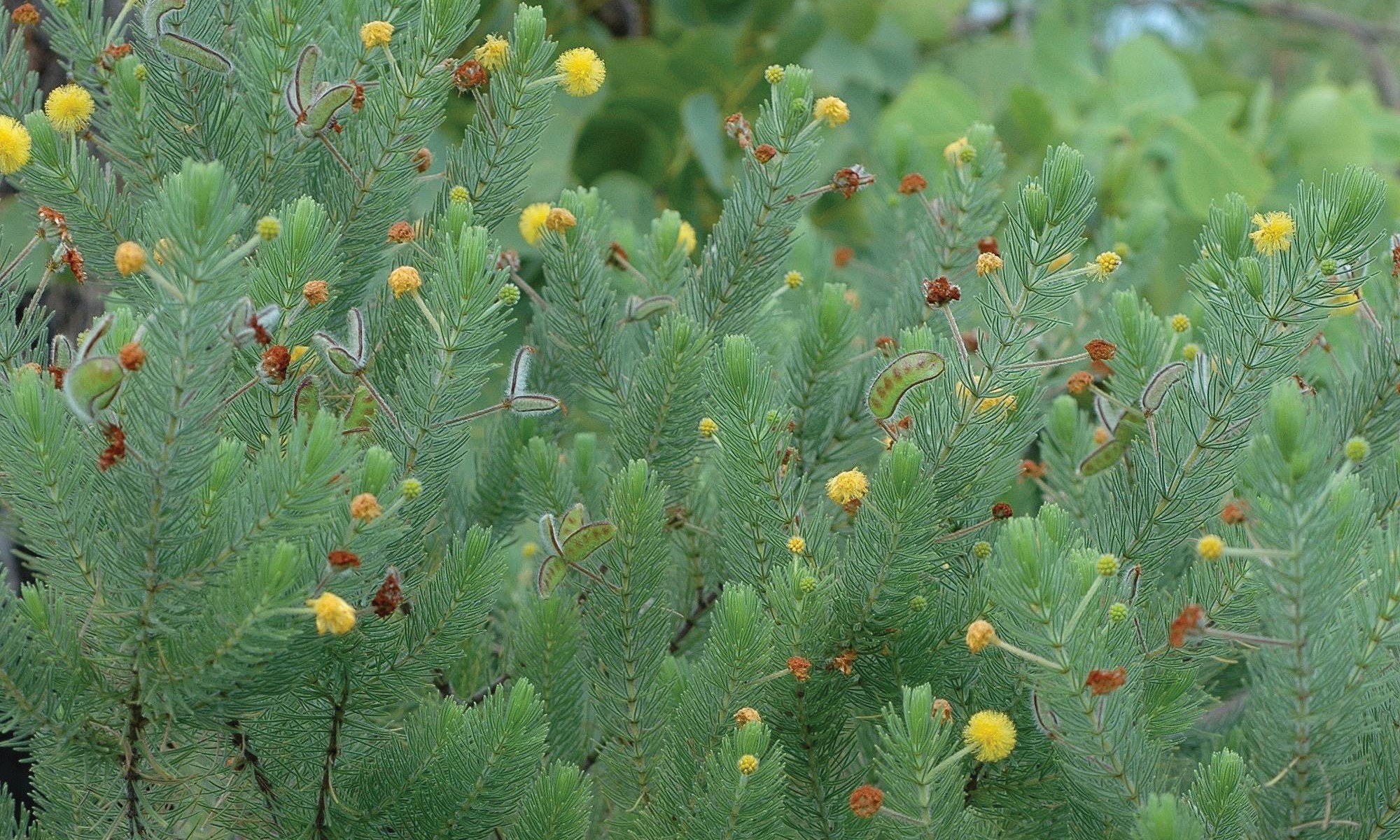 Only named in 2014, the Graveside Gorge wattle (Acacia equisetifolia) is listed in the Environment Protection and Biodiversity Conservation (EPBC) Act 1999 as critically endangered, and exclusively grows in Kakadu National Park.

It is a member of the legume family and is a shrub that grows up to 1 metre tall. The yellow flowers are clustered in round flower heads and the leaves are arranged in regular crowded whorls.

It is known from two small populations located on separate bluffs above Graveside Gorge in a remote area of the park, about 1 kilometre apart. The populations are under threat from changed fire regimes.

Kakadu National Park staff and traditional custodians monitor the populations regularly and, as part of the monitoring, have collected a full genetic representation of the species.

Fire management in Kakadu National Park, which includes fuel reduction burns in a mosaic pattern, aims to reduce the likelihood of large-scale fires and provide longer intervals between fires.

As a safeguard against extinction, seed of Graveside Gorge wattle is stored at the National Seed Bank at the Australian National Botanic Gardens. Future plant conservation recovery projects include propagation and translocation of plants.