In 2022 Parks Australia will commence consultation with stakeholders to prepare management plans for the Christmas Island Marine Park and Cocos (Keeling) Islands Marine Park. Management plans will establish the detailed management arrangements for these marine parks for 10 years.

These two zone types and their locations reflect the co-design process for IOT marine parks undertaken with island communities.

Generally, zoning determines what activities can take place in different areas of marine parks. Yellow zoning has been implemented across most inshore waters of IOT marine parks, as this allows activities that were occurring in these waters before the new marine parks were declared to continue. For example:

More detailed information on activities is provided in the zoning table below.

Christmas Island National Park and Pulu Keeling National Park both extend a short distance into the marine environment—50 metres from the shore around most of Christmas Island and approximately 2 kilometres from the shore in a square around North Keeling Island. Established management arrangements for the marine areas of these national parks continue to apply.

Parks Australia does not manage activities in the areas that are not part of the marine parks or national parks.

Some new activities in the marine parks may require assessment by the Director of National Parks to decide if and how they can proceed. This will help to ensure that risks to the values of the marine parks are reduced as much as possible and that there is appropriate consultation with local communities and other stakeholders.

New activities requiring assessment include, but are not necessarily limited to:

More detailed information on activities is provided in the zoning table below.

If you are considering undertaking one of these activities or another activity not covered in the zoning table below, you must contact Parks Australia at iotmarineparks@environment.gov.au. Assessment is in two steps:

If the Director is satisfied as to these matters, they will issue an authorisation for the proponent to carry out the activity.

Parks Australia will continue to work with IOT communities and other stakeholders to establish more detailed guidance on assessment arrangements and adjust these if necessary during the transitional management period. 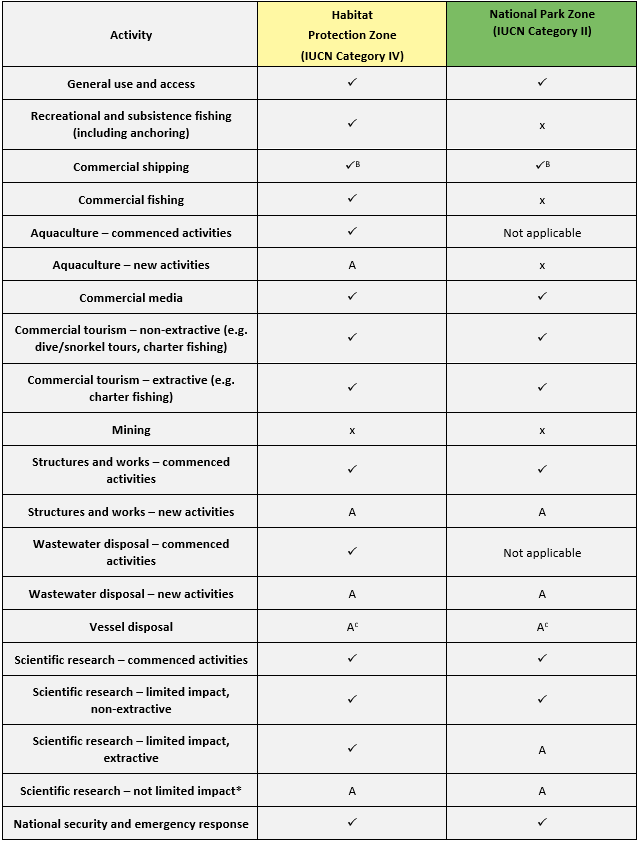 ✓       Activity is allowed.
X     Activity is not allowed.
A     Activity is allowable, subject to assessment by the Director of National Parks.
B      Anchoring is not allowed except in anchoring areas determined under r.12.56 of the EPBC Regulations.
C      Vessel disposal only allowed in accordance with the Environment Protection (Sea Dumping) Act 1981.
*     Scientific research not considered ‘limited impact’ is research that includes the taking of any species that is protected under the Environment Protection and Biodiversity Conservation Act; and/or a species in the class Mammalia (mammals), class Aves (birds), class Reptilia (reptiles), or class Amphibia (amphibians).

All allowed and allowable activities must be undertaken in accordance with applicable Commonwealth, State and Territory laws.