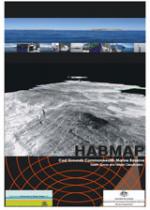 The Cod Grounds Commonwealth Marine Reserve (CGCMR) was established in May 2007 for the protection of critical habitat of the endangered grey nurse shark.

In order to better understand the extent, distribution and structure of seabed habitats, particularly rocky reef, throughout the reserve, the NSW Department of Environment and Climate Change (DECC) was contracted by the Australian Government Department of Environment, Water, Heritage and the Arts to conduct sonar mapping in the CGCMR and the surrounding seabed.

The projects brief was to map 13 km2 in the CGCMR and surrounding waters, however a total of 16.9 km2 was actually mapped and classified.

As part of related projects funded through the Natural Heritage Trust and the Northern Rivers Catchment Management Authority an additional 24 km2 was mapped within Commonwealth waters extending to the State waters boundary, and a further 9.5 km2 directly adjacent to this area within State waters.

Habitat types have only been classified within the original defined mapping area at this stage, although detailed bathymetry is provided for all the mapped areas combined.

Four distinct substrate types were identified from the acoustic data:

The area within the boundary of the Marine Reserve (3.14km2) is dominated by a bedrock outcrop (0.91km2) which rises to a depth of 21 m at its shallowest point and reaches 46m at its deepest.

The outcrop appears to consist of two distinct geological facies and is surrounded by boulder and cobble slopes (1.07 km2), which interlace with the sand of the surrounding seabed to form another unconsolidated habitat type which consists of coarse sand with ripples and significant amounts of shell grit or sand and cobbles or boulders where the rock covers less than 50 per cent of the surface (0.91 km2).

Some areas of fine sand (0.38km2) also occur, predominantly in the north-west sector of the reserve.

The Cod Grounds reef is the northern most of a series of three specific outcrops in the 36.7 km2 survey area.

These reefs extend to the south and south west toward Diamond Head. All three reefs have a similar spatial extent and similar topography.

The Cod Grounds differs slightly, being the shallowest reef in the series, with steeper slopes in the shallow portion of the reef.

The Cod Grounds reef is separated from the closest neighbour by a sand gutter a few hundred meters in width.

The acoustic data shows the bedrock to be of tilted beds striking north-east consisting of sand and cobble filled gutters a few meters deep and 10 to 20m across.

Towed underwater video transects in the area were used to validate the classification of seabed habitats from the acoustic data and to gather information on the biodiversity of the area.

Barrens habitat identifiable by the presence of the long-spined sea urchin Centrostephanus rodgersii and encrusting pink coralline algae, was recorded in the north-east section of the survey area, at depths between 25m and 35m.

Sponges were common in reef areas, with encrusting sponges widespread and found at all depths surveyed, while erect and branching sponges were generally found at depths greater than 35m.

Assemblages of mixed brown algae were common on reef areas, particularly in areas of low profile reef shallower than 40m.

Despite being the dominant macroalgae on shallow reefs in temperate waters of NSW, no Ecklonia spp. was observed in this survey.

The reefs extend into NSW State waters and are connected with reef systems which extend towards Crowdy Head.

The distribution and extent of the specific seabed habitat types in this region are currently being mapped by the DECC and will be made available once completed.