Collation and analysis of oceanographic datasets for National Marine Bioregionalisation 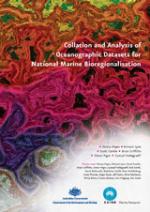 The collation and analysis of oceanographic datasets reported here was one the projects commissioned by the National Oceans Office to support the National Marine Bioregionalisation.

The main aim of this project was to provide oceanographic datasets to the Pelagic Integration Project during 2004; some were also provided to the Benthic Bioregionalisation Project coordinated by Geoscience Australia.

The oceanographic information collated was at two broad scales:

The extent of the national study was the region 90o– 180oE and 0o–60oS. The data collected over this region provided information on:

There were very few biological datasets on a national scale; this has been identified as a priority area for further research.

The Northern Large Marine Domain extends from Cape Talbot in Western Australia to Cape York in Queensland, encompassing part of:

The datasets provided were similar to those listed above, with the addition of some finer-scale biological data for the Gulf of Carpentaria and Albatross Bay.

To provide a more detailed look at specific processes in Australia’s oceans, two case studies are included in this report:

The first case study provides a general discussion of water-mass formation and a detailed look at the formation of one South Pacific water mass, the Subantarctic Mode Water.

This water mass is formed by deep winter convection between the subtropical front and the subantarctic front. It spreads equatorward in the subtropical gyres centred approximately 600 m depth.

The second case study, on the dynamics of the East Australian Current, gives a detailed overview of this western boundary current and its associated eddies. The discussion brings together the physical and biological processes associated with this feature.

A third case study, of Albatross Bay, is included in the accompanying report of the Northern Large Marine Domain (Rothlisberg et al 2005). It explores both physical oceanography and biology.

The Albatross Bay Region in the north-eastern Gulf of Carpentaria supports local fisheries for three species of commercially important penaeid prawns. This case study discusses both seasonal and interannual variability in biological and hydrographic parameters in tropical Australia.

In addition to providing inputs for the National Marine Bioregionalisation project, this work has facilitated public access to fundamental marine data. All the data collated have been delivered to the National Oceans Office as GIS layers and maps.