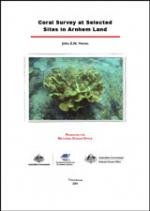 No coral reefs were found; all sites visited (Table 1, Figure 1) had a terrigenous substrate (Table 2).

There was a high degree of environment uniformity among the sites. All were essentially composed of irregular to rugged substrates sloping to soft sand.

Although there was no reef development there were extensive coral communities. These were sometimes very diverse and contained coral colonies that reached maximum sizes for the species.

All sites were in pristine condition. There was no evidence of current or past bleaching or other indications of thermal stress except for site 13 (see Table 2).

Small numbers of Acanthaster were found at several sites but there was no evidence of any outbreak, present or past. Drupella were mostly uncommon and there was no conspicuous disease of any form.

Some sites had corals and soft corals covered with a flatworm that is common on many coral reefs.