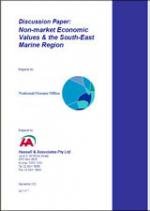 The Region includes areas of the continental shelf beyond the EEZ, that are claimed by Australia under the United Nations Convention on the Law of the Sea (UNCLOS) (NOO 2001a). The area is depicted in Figure 1.

The natural resources and oceanographic and biological services of the Region support a range of stakeholders, including the commercial fishing and tourism industries, endangered species, such as the blue whale, and educational sectors involved in research.

The marine environment also contributes generally to human welfare through the functions of climate and atmospheric gas regulation.

These goods and services have value to society whether or not they are actually traded in markets. It is the purpose of this discussion paper to explore the concepts of non market economic values associated with environmental goods and services, with particular reference to the South-east Marine Region. The paper provides: