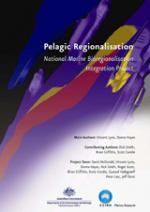 The three-dimensional nature of the marine environment and its temporal variability have posed difficult challenges in understanding and managing the pelagic (water column) component of the oceans.

Other than in satellite-based plankton images, biological information lacks spatial and temporal coverage to adequately regionalise this environment, or to determine surrogate relations between geophysical properties and ecological structures and processes.

Management needs and potential uses of pelagic regionalisation information are consequently also unclear because there are no synergies with terrestrially based studies or with regionalisations of benthic marine systems based on distributions of biota and the geophysical properties of the seafloor.

We describe a hierarchical framework for regionalising the pelagic marine system that relies primarily on physical properties and satellite plankton images.

Three levels of the framework (Levels 1–3) are described by application to Australia’s Marine Jurisdiction.

The first level (Level 0) describes the structure at the scale of the oceans.

The second level (Level 1) describes ocean zones that appear as latitudinal bands at the surface (Level 1a) but also have an underlying three-dimensional structure (Level 1b).

The fourth level (Level 3) describes the energetics and variability of water masses; we present only the surface characterisation at this level.

Although finer-scale levels (Levels 4a and 4b) are presented in the regionalisation framework, we only present analyses down to Level 3.

The finer-scale levels are dynamic features whose description is left as a subject for future research.

Key conclusions of this project are summarised below:

At this stage, the pelagic regionalisation of Australia is being used mainly to illustrate the complexity of the structure of the marine water column.

Our work also suggests that the coupling between pelagic and topographic structures is much tighter than we expected, and that a unified treatment of pelagic and benthic regionalisations should be possible.

A corollary conclusion is that benthic structures may be influenced by the pelagic environment and that past benthic regionalisations should be reviewed to take account of this project’s findings.