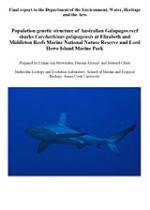 The study is the first to investigate the genetic structure of the Galapagos reef shark Carcharhinus galapagensis.

The only Australian populations of this apex predator occur at the Elizabeth and Middleton Reefs Marine National Nature Reserve and Lord Howe Island Marine Park, which includes Balls Pyramid.

Insight into the genetic structure of Australian populations of this patchily-distributed species will inform management and conservation strategies at the Elizabeth and Middleton Reefs Marine National Nature Reserve and the Lord Howe Island Marine Park.

The aim of this study was to determine if C. galapagensis at Middleton Reef (n=28), Elizabeth Reef (n=29) and Lord Howe Island (n=29) represent single or separate populations.

The methodology was to sequence a non-coding mitochondrial DNA (mtDNA) control region in all samples.

The results showed 21 polymorphic sites and 36 haplotypes. Significant population structure was identified by analysing molecular variance (AMOVA), Fst = 0.5416, PC. galapagensis mtDNA control region was h = 0.5717, which is relatively high compared to other sharks but low compared to marine teleosts (fish with bony skeletons). Low genetic diversity in sharks is attributed to their:

C. galapagensis genetic structure is based on female mediated gene flow (mtDNA) alone and may therefore indicate philopatric behaviour (returning to a specific location in order to breed).

Coalescence analyses suggested that the Elizabeth and Middleton Reefs population originated from the Lord Howe Island population during the late Pleistocene (10,000 to 20,000 years ago).

This report provides important management information. It suggests that the Elizabeth and Middleton Reefs and Lord Howe Island populations are best managed separately, as they are unlikely to replenish each other in the event of the loss of either population.

The report identifies two additional studies that will ensure management outcomes are optimal. These are: