With regard to the releasing of parasitoids and ladybird predators of the pest scale Pulvinaria urbicola on Pisonia grandis: 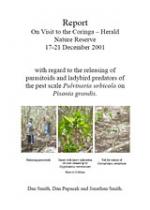 These Pisonia plants were derived from thick (2-4 cm) wood cuttings brought back from NE Herald in August.

They were dipped in Clonex (Gel-Green 1.5g/l indole 3 butyric acid) and rooted in river sand in a mist bed with bottom heating. Establishment of C. ceroplastae (coming out of late winter) was slow but there were moderate levels by mid December.

The scale and parasitoid infested shoots were pruned off on 15 December, leaves removed and the shoots dipped in a mixture of benomyl fungicide and the miticide abamectin.

Metaphycus sp. was taken as adults in ten 500 ml tubs. C. montrouzieri was again supplied free of charge by Dan Papacek of the ‘Bugs for Bugs’ Insectary at Mundubbera with a total of 20 tubs totalling about 10 000 adult beetles.

The Metaphycus and Coccophagus were released on 18 December in transect 8 (the northern end within the first 100m) where there was the greatest concentration of scale (surviving C. montouzieri predation since release in August).

The scale/parasitoid infested Pisonia twigs were hung in 8 small tubs (ant proofed) to allow progressive emergence of Coccophagus over the next 2 weeks.

The remaining 3000 beetles were released on SW Herald (interior SW corner) on 20 December.

The area of release was 200m by 50m or 1ha (and this was treated with the dog biscuit fipronil ant bait).

Scale/leaf samples were made (as described in Report No 1, 16-23 March 2001). Counts were made every 60m. Scale samples were collected, examined using a binoc stereoscope on the island and stored in mesh tubs and tubes for further examination/rearing out on the mainland.

Counts of the transects of NE Herald made on 19-20 December are listed in Appendix 1. Results are summarised in Table 1.

Scale levels: The most heavily scale infested transect was No 8 with a total of 415 live scale (172 first, 171 second and 72 third instars).

Whereas dead trees were evident in transects 1, 2, 6 and 8 especially on the northern edge in August, there was little evidence of dead trees in December.

The period from August – December must have been very dry as evidenced by water stressed Argusia argentea and by the dryness of the sand above the high water mark.

This had also stressed the Pisonia forest but possibly the only evidence of this was a smaller average leaf length in the samples - 12.04cm in December in comparison with 20.4cm in August and 19.02cm in March.

There was no evidence of leaf wilting in the Pisonia.

Ant numbers had fallen then approximately 4 fold since August and by 30 per cent in comparison with March.

In December, 87 per cent of all scale infested leaves had evidence of beetle activity most of it in the previous 2 months.

Out of a total of 1053 adult egg producing scale, only 9 were free of beetle activity, 993 had been eaten out and 51 were currently under attack.

The beetle has almost destroyed the scale populations in every transect except 8 and is currently very active there.

On SW Herald, vegetation was severely affected by the dry conditions and species like the herbaceous Acharanthes aspersa, Portulaca oleracea and Tribulis cistoides (hosts of the scale) were much reduced with many dead plants.

It is evident that a very large population of beetles has developed on NE Herald with many dispersing adult beetles looking for food.

Wasp parasitoids: Establishment of Euryischomyia flavithorax and Metaphycus sp was confirmed with E. flavithorax the most numerous particularly on the northern edge of transect 10 on NE Herald where about 50 out of 60 second instar scales on one leaf were parasitised by this species.