With regard to the releasing of parasitoids and ladybird predators of the pest scale Pulvinaria urbicola on Pisonia grandis. 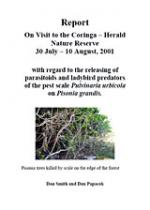 A large quantity of the scale hosts - pink wax, Florida wax and green coffee scale on citrus, lillypilly, umbrella tree and gardinia were collected during July and emerging C. ceroplastae and E. flavithorax wasps were collected and stored for transportation to NE Herald.

The small wasp Metaphycus sp (as also recorded from P. urbicolae in the Capricorn-Bunker studies) was also collected.

The first consignment of a total of about 1000 parasitoids was air freighted to Mark Hallam in Cairns on the 30 July just prior to the first embarkation.

These were released into three 2m long sleeve cages over a Pisonia scale infested branch along transect 1 and 5 on 31 July.

The second consignment of a further 1000 parasitoids were collected from 31 July – 5 August and accompanied Smith and Papacek to the island on 6 August. They were released into two of the sleeve cages on 7 August.

The third sleeve cage (in transect 1) had heavy ant activity and was removed and relocated nearby and fresh parasites released.

All of the sleeve cages were removed on the 9 August prior to embarkation for SW Herald and Cairns.

In addition some live parasitised P. urbicolae scale – mainly from Pisonia (sent to Nambour from Heron Island on the 1st August by Rod McKenzie of Qld National Parks and Wildlife) was left in an ant proofed tub in transect 1 between the two sleeve cage sites.

The reason for the staggered releases (on 31 July and on 7 August) and for the use of the scale with unemerged C. ceroplastae was to ensure a better chance of establishment for this species.

It may be that the male larva of this species (as is common in many Coccophagus spp) is hyperparasitic on the female larva and for males to be produced there must first be female larvae present in the scale.

A total of about 40 000 ladybird adults were reared and donated by the Bugs for Bugs Insectary at Mundubbera. The normal commercial cost of these is $8000.

About 1000 were sent up to Cairns for the first embarkation and the bulk were taken out on 6 August.

A release was made into a sleeve cage on 31 July but because of heavy ant presence the cage was removed on inspection on 7 August.

All subsequent releases were made into the open in noticeably infested areas in transects 1, 2, 3, 4 and 6. All of these release areas were treated with ant bait on 7 and 8 August.

Ants (Tetramorium sp.) were noticeably aggressive to the ladybirds with up to 6 ants attacking one ladybird.

Beetles were evident at release sites on 8 and 9 August feeding on the scale.

Ants (mainly Tetramorium sp. and some Monomorium sp) were very active at scale infested sites and possibly poised a threat to the establishment of both parasitoids and ladybirds.

Three ant baits were broadcast on the ground at each release site - Amdro (7.3 g/kg hydramethylnon), Presto Ant Bait (0.01 g/kg or 10 ppm fipronil) and a second fipronil bait based on crushed nutrigrain and fipronil at 100ppm.

Amdro is currently being used for the fireant Solenopsis invicta in Brisbane and controls also Singapore ant Monomorium destructor and the coastal brown ant Phediole megacephala.

Presto is based on a fish meal and is being used against the yellow crazy ant Anoplolepsis gracilipes in Christmas Island and in the Cairns region. The baits were distributed at a rate of 2.5 kg/ha.

Baits such as these usually take up to a fortnight to give full effect but encouragingly, areas in transit 1 and 4 treated on 7 August had up to 90% ant reduction in just 24 hours.

The ant bait applications sufficed at the least to ward off the heavy predation on the beneficials observed on 7 August.

The total vegetated area of NE Herald is about 25 ha. Ant bait application over such an area would be difficult but not impossible.

Once the natural enemies are well established such action may well not be necessary. As the scale is reduced, so will the ants.

Some tree death was evident in some of the more heavily infested areas in transects 1, 2, 6 and 8 especially on the northern edges of the forest.