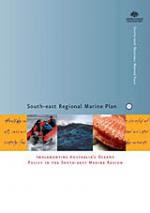 The South-east Regional Marine Plan has been developed by the Australian Government in consultation with South-east State governments, industry representatives, Indigenous groups, marine communities and others with an interest in the marine environment.