In July last year, we took you to the heart of the Timor Sea, tracking the adventures of an intrepid team of scientists that spent two weeks surveying the islands of Ashmore Reef Marine Park. These tiny dots in the middle of the ocean are a magnet for seabirds, turtles and shorebirds, some of which travel many hundreds of miles to eat, rest and breed.

Learn more about the vegetation, bird and invasive species surveys the team completed during the first half of the Ashmore Environmental Assessment Project by reading Ashmore Reef Marine Park: An Indian Ocean Oasis which was published in 4th edition of the Parks Australia Science Newsletter. If you’re short on time, you can just watch the short video below.

The Ashmore Environmental Assessment Project set out to see how life is fairing at Ashmore Reef and what management steps will be needed to address threats to this ecosystem. In this article, we’ll share some field highlights from the second half of the project and overall project results.

In mid-2019, a different team of scientists from institutes across Australia, including CSIRO and the University of Western Australia, gathered in Broome for the 30 hour trip to the marine park. Their mission was to assess the health of the reefs and seagrass beds that surround the islands and survey the marine species that call these habitats home. Globally, Ashmore Reef is known for its internationally significant populations of birds: 15 seabird and four heron species have been observed breeding on the islands, many other seabird species roost there and a further 30 species of migratory shorebird stop over on their journey along the East Asian-Australasian Flyway. 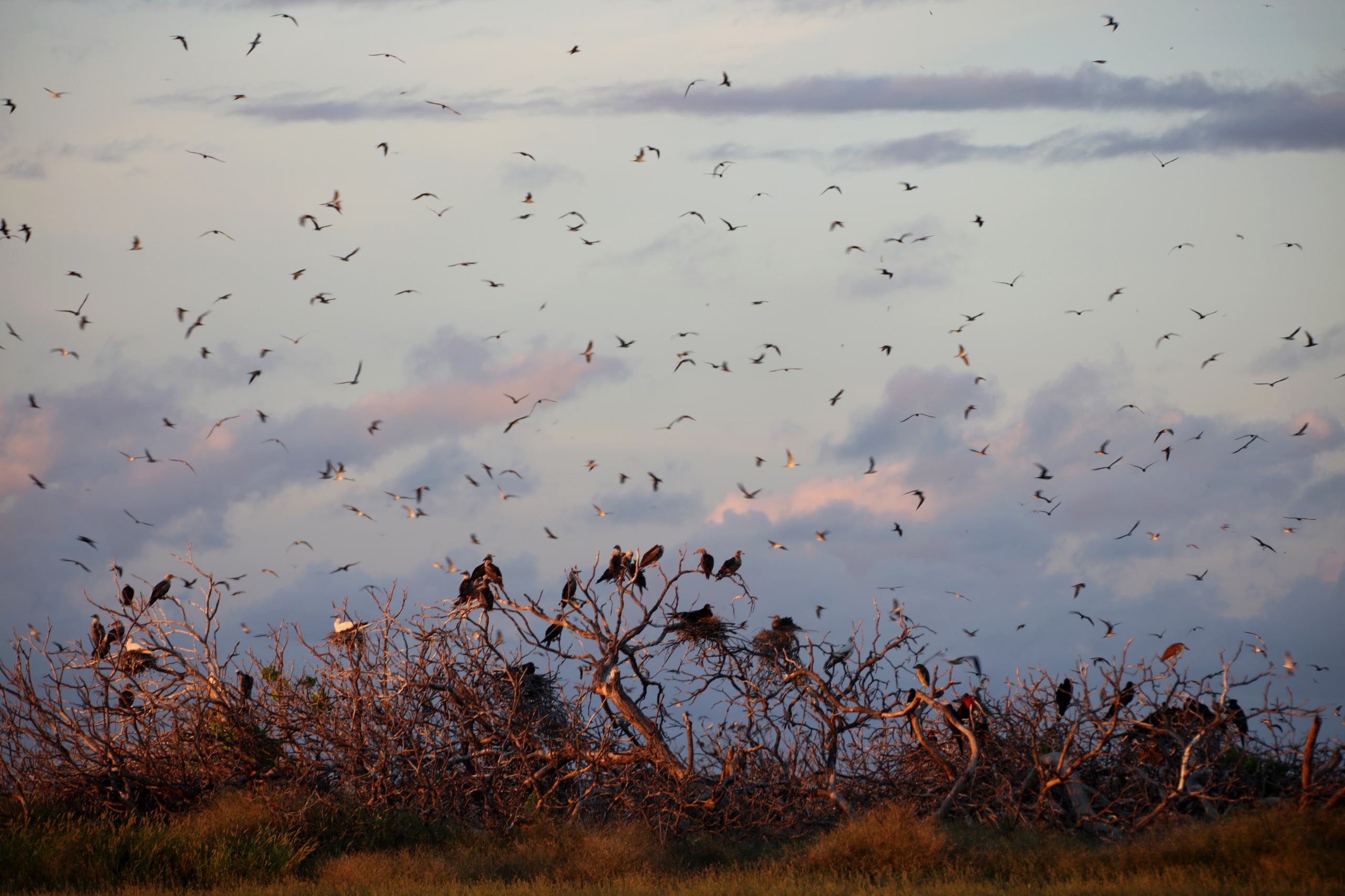 However, under the waves, Ashmore’s biodiversity truly comes to the fore: 275 species of coral and over 750 species of fish have been recorded here, along with many, many more invertebrate species. Notably this list includes 47 species of sea cucumber, 178 species of echinoderms (e.g., sea stars and urchins) and 433 molluscs. This diversity is significantly higher than nearby reefs. Green, hawksbill and loggerhead turtles breed and feed here, and the West Island lagoon is home to a small dugong population. Historically, Ashmore was a recognised global hotspot for sea snakes but populations started to decline in the early 2000s and in recent years, only a handful of animals have been sighted. 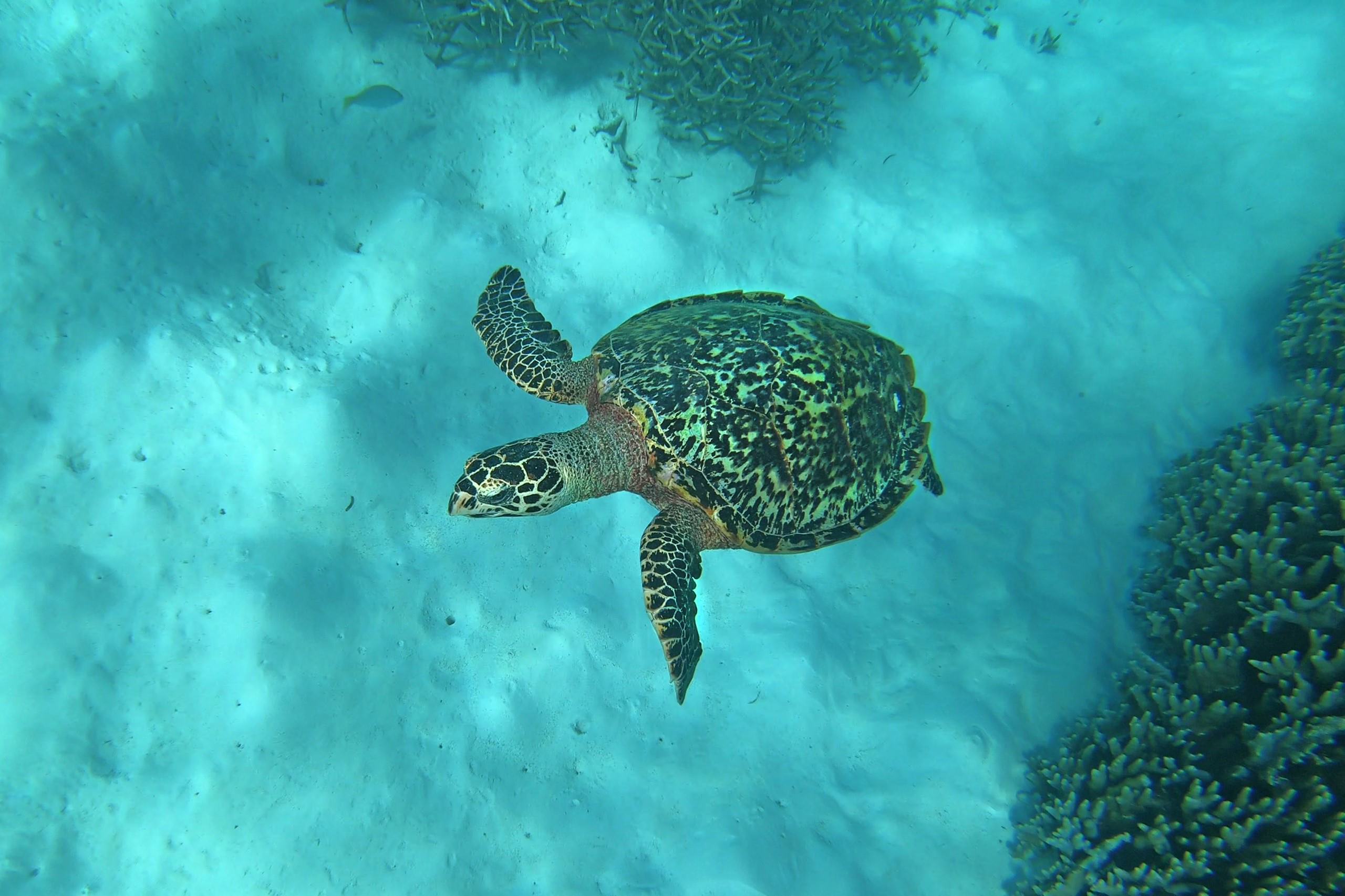 Assessing the health of such a diverse marine ecosystem is challenging, with many different components to consider. The team focused on completing comprehensive surveys of the coral reef communities, with a specific focus on trochus, giant clams, sea cucumbers, sea snakes, fish and sharks. They also assessed benthic cover of coral, macroalgae and seagrass, and took a closer look at the biomass and productivity of the seagrass beds. The principal survey method used followed a globally standardised Underwater Visual Census approach, however, a very important aspect of this project was trialing innovative technologies and survey techniques.

A kaleidoscope of colour

So what is Ashmore Reef really like? Experience it for yourself – a magical world awaits!

Like many of the Australian Marine Parks, Ashmore Reef Marine Park is remote. Typically, this means that conducting science is expensive and opportunities are few and far between, so we’re always looking for ways to improve our research efficiency. On this trip, CSIRO scientists trialed the environmental DNA (eDNA) approach to monitor marine biodiversity, filtering approximately 700 kilograms of seawater from 110 sites around Ashmore Reef. The method involves sieving tiny genetic remnants from seawater samples and comparing their unique “fingerprints” against databases to identify species. While still relatively new, the eDNA approach promises enormous benefits, from detecting species that like to stay hidden to vastly reducing the time it takes to complete biodiversity surveys.

What has the project told us?

The Ashmore Reef voyages might be a distant, tropical memory for the project team, but the work hasn’t stopped. In the intervening months, they’ve been processing and analysing the huge amounts of data (more than 50,000 observations!) collected. The results are now in, and overall they reinforce the message that Ashmore Reef is an ecosystem worth taking great care of.

The status and diversity of seabirds and shorebirds appears healthy, with an increase in the number of adults observed across several species since at least 2014. There has also been an expansion in breeding territory for a handful of species including the lesser frigatebird, brown and red-footed booby, sooty tern and brown noddy. For the first two species, the data indicates that ≥1% of their global population depends on Ashmore Reef, adding further weight to the marine park’s Ramsar listing.

Introduced species, known to occur on Ashmore’s islands were also assessed. The invasive tropical fire ant, believed to have been introduced in the 1990s, showed evidence of recovery from an earlier pilot control project and was found on all three islands. Encouragingly, despite targeted searching, no clear evidence of interference with nesting seabirds or turtle eggs was observed. Based on the impacts tropical fire ants have had elsewhere, these findings suggest we need to clarify what is happening on Ashmore’s islands before we settle on the best management strategy.

Asian house geckos and a number of weed species, particularly buffel grass, were also the subject of targeted surveys. Geckos were found in abundance on native octopus bushes on West Island but further research will be needed to determine if their presence is having an impact, for example on invertebrate communities. The hardy, fast-growing buffel grass, as well as a number of other threatening weeds, were found to be well established on West Island. The presence of these weeds is a cause for concern because they can out-compete native species. At Ashmore, this could potentially have important ramifications for the seabirds that rely on this vegetation for nesting sites.

Below the waves, eyes were peeled for marine species of concern like the crown-of-thorns starfish. A single individual was observed but no widespread evidence of damage. Across the reef flats, the corals were in good condition and species diversity is high, with signs that recovery from historical coral bleaching events is well underway. Coral cover varied across the reef, with reef edges showing the highest density, dominated by Acropora, Pocillopora, Porites and favid species. The continued health of the reefs here will depend, in part, on the frequency and strength of future coral bleaching events.

The seagrass beds, important feeding grounds for resident turtles and nursery habitats for a range of species, were also found to be healthy. While shoot density was not high and fewer species were observed from previous studies, the beds were extensive and very productive. Observed fish assemblages were highly diverse, with a total of 22,121 finfish from 43 families recorded. Sharks were rarer and while there are other studies that suggest numbers have rebounded since the cessation of fishing, this work suggests that populations may still be depressed.

Unfortunately, populations of exploited sea cucumbers, clams and trochus continue to suffer the effects of historical harvesting. The abundance of many species remains extremely low, and some species are thought to have reproductively ineffective populations, suggesting they may never recover. Further surveys to confirm this are required. Sea snake numbers also continue to be very low at Ashmore, with the team spotting a single olive sea snake from the diving tender after two voyages and extensive survey efforts. The mystery surrounding the disappearance of sea snakes from Ashmore Reef continues, with a number of theories being the focus of continued research.

This integrated terrestrial-marine project is the first of its kind at Ashmore Reef Marine Park. It has provided data which will help us consolidate our baseline understanding of the marine park’s terrestrial and shallow water ecosystems. It has also provided data that will add to historical data sets, providing insights on how species, communities and habitats have changed over time. Together, this information helps us assess priority management needs for this remote ocean oasis. Parks Australia will continue to work with the science community in ensuring Ashmore Reef Marine Park is protected for the benefit of all Australians.