Biological survey of the Arafura Sea 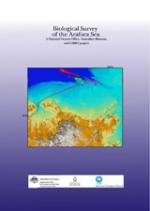 In the first benthic biological survey of the Arafura Sea, a 2-person team collected 107 samples from 56 stations on Southern Surveyor voyage 05 of May 2005.

This program was conducted opportunistically in conjunction with a Geoscience Australia geological survey of selected regions in the Arafura Sea.

This survey only covers approximately 5 per cent of the total Arafura Sea, but it provides a valuable shallow to deep transect across the region in depths ranging from 69 to 234 metres.

The sediments from many samples were washed using 300μm screens and the screened materials preserved for later identification.

These sedimentary samples might contain hundreds of macrofaunal invertebrate species at millimetre and submillimetre scales and are currently being processed and documented.

Species accumulation curves relative to sampling effort from the large animal data do not level off, which indicates that the survey has not captured all of the species richness in this region.

This report includes two large appendices, one with the locality and sample data from the expedition and the second with digital images of the larger species extracted from the samples.